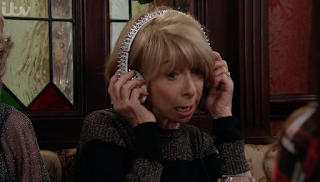 (This post was originally posted by Scott Willison on the Coronation Street Blog in December 2017, reposted to this blog with permission.)


Mess with Gail at your peril.  Rewind when the crowd say bo selecta!  Don't try buying Gail noise-cancelling headphones to keep her quiet, Sarah-Lou; she's had decades of experience of poking her nose in where it's unwelcome, and she will always outfox you.  Gail immediately messed with the heads of her nearest and dearest - a fine Platt Christmas tradition - by bellowing Dean Friedman across the Rovers until they went home.  Then she knocked back another glass of Prosecco and giggled with her mum.  Stuff Rita and Eva; they should've brought Gail in for the "heartwarming" montage singalong, crooning Do That To Me One More Time while Audrey slid off her barstool. 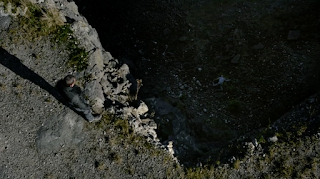 God really does protect His own.  Billy plummeted off the side of a cliff, smashed into the rocks below, and somehow didn't die.  On top of that, a random walker - on Christmas Day! - spotted him and called the air ambulance and got him airlifted to hospital (there was a hilarious moment where Adam asked "which hospital?".  Wethy General, Adam; it's ALWAYS Wethy General).  Someone up there was looking after Billy, and it should make Peter very nervous.  He might want to start wearing rubber soled shoes to protect him from lightning strikes. 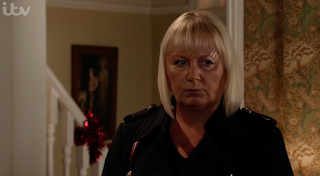 D.I. Eileen is on the case.  Eileen telling the Barlows that she would get to the bottom of who grassed up Billy to Summer's evil grandmother might have carried more weight if we didn't know she lives her life in a state of blissful ignorance.  Somehow, the woman who is unknowingly married to a double murderer, who didn't know her daughter in law wasn't in Australia, and who is deceived on a pretty much hourly basis by friends, neighbours and relatives, believes she can root out the rotten apple in the barrel of Barlows.  Aim lower, Eileen; perhaps try and work out who the murderer is in a nice Agatha Christie before you try to break the residents of number one.  The revelations about the death of Susan has brought them together into some kind of Mancunian Mafia crime family and it'll take more than bellowing at them from across the street to get them to fold. 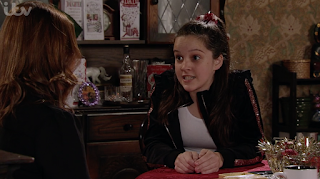 Steve and Tracy are like tomato sauce and custard.  From the mouth of babes, and so on.  Amy's absolute horror at the prospect of her parents was a delight; she really was taking lessons from Granny Blanche all those years.  Tracy and Steve would be a flaming mess of a relationship, an orphanage on fire disaster of monumental proportions, and the wise beyond her years Miss Barlow knows it.  Besides, I'm enjoying Tracy's new role as an unofficial narrator for the show, standing on the sidelines and carping bitchily about the goings-on.  I'd hate her acid tongue to be neutralised by love. 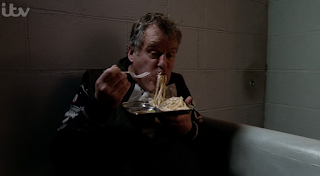 They serve tagliatelle in the police cells on Christmas Day.  You remember how Roy and Mary started out as odd, slightly scary characters and then, over time, they developed into much-loved comic legends and pillars of the community?  Brian seems to be experiencing the reverse.  He started out as a loveable buffoon in an affecting relationship with Julie, and now he's a weirdo who bellows at teenage girls and breaks into the neighbours' houses.  Gina's decision to call the police was an overreaction - I feel like "she's bipolar" will be used in the future to cover many out of character moments - and Brian's subsequent interrogation was yet another nail in the coffin for Weatherfield Police's reputation.  Worse, I'm pretty sure it was all meant to be funny, when it was about as amusing as polio.  The only funny part was watching that poor actor trying to look threatening while comparing Cathy to a manhole cover.

Any late Christmas gifts can be forwarded to the author via Twitter @merseytart. None of your tat from a motorway service station, mind.