A suggestion for a new Rovers layout 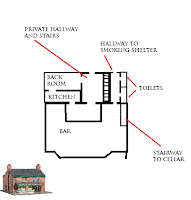 (This post was originally posted by on the Coronation Street Blog in March 2013.)

It's no secret that the current Rovers layout is a bit strange, with toilets that by all means should be in the Barlow's living room, a back room and kitchen that should be in the middle of Rosamund Street, and a stairway that leads to the back yard.

So here's my simple solution to all the Rovers TARDIS woes, a more compact back of the Rovers, with two doors behind the bar, one leading to the kitchen, and one to the private hallway.

A door to the kitchen would be a good addition due to food being more important these days, after all they have a designated cook now.

I also put two small toilets in the hallway that leads to the smoking shelter as well as a staircase that would lead to the cellar in the bar. The bar itself would end up being bigger too.

I hope Corrie do take this opportunity to sort out the layout of the Rovers, even the original Rovers was oversized with the snug and select breaking the boundaries of reality.