Coronation Street A-Z: A is for Accidents 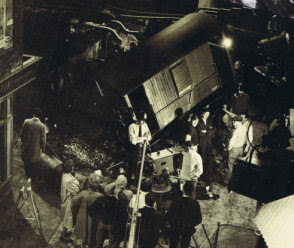 In recent years, accidents are a common occurrence in storylines. Not a month goes by without a car crash or some collision. It is part of the sensationalism of soaps these days. But accidents did happen in the good old days of Corrie as well.

You might remember the train crash that spiralled into the street in 1967. Ena Sharples was under the rubble but survived. Only minor characters were killed. This was echoed 43 years later when a tram crashed into the street in 2010 and claimed the lives of Molly Dobbs and Ashley Peacock and injured many others. The Corner Shop and the Kabin were destroyed as a result. 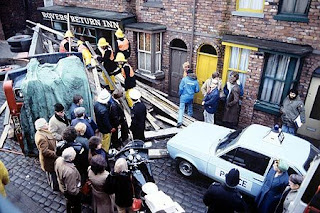 And in 1979 a lorry crashed into the Rovers. Len Fairclough, Mike Baldwin, Alf Roberts and Betty Turpin were injured but only the lorry driver was killed. Baby Tracy Langton was feared to be covered under the timber of the lorry but was later found safe and sound. Alf suffered mental problems and had angry outbursts at the neighbours and had to have psychiatric help. The Rovers wasn’t affected greatly and the interior remained unchanged.
As for characters being involved in accidents: Renee Roberts was killed in a car/lorry collision back in 1980; Jenny Bradley and Martin Platt were involved in a car accident in 1986; Lisa Duckworth was killed by a car in 1993; Judy Mallett died of a result of a car crash with Vera Duckworth; Tyrone and Molly Dobbs have been involved in a car crash as did Tyrone with Tina McIntyre and girlfriend Kirsty Soames; and Sarah Platt nearly died when she was involved in a car crash with Aiden Critchley in Ken Barlow’s car. Then were the deaths of Dennis Stringer (2002) and Paul Connor (2007) as a result of car crashes.

Can you recall any other accidents over the years?