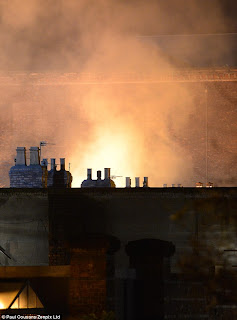 (This post was originally posted by Clinkers (David) on the Coronation Street Blog in March 2013.)

Well, have we all enjoyed Fire Week then? A well-deserved round of applause for the technical team on Corrie who made the whole thing look so fearsome. Enough of Rita's wig though and on to the main action as viewers looked on to see St. Ella do her Joan of Arc routine.

Possibly therein lies the problem. As exemplified by numerous comments on these very pages, the most that Stella can elicit is apathy. Many loathe her whereas most of us just accept her for the vision in beige that she is. Had this been Hayley, then we would have felt justifiably upset. Tears would have been shed. At this stage of the game though, Stella's passing would not have been a cause for regret.

The idea of the locals stripping off in the local restaurant (how weird was that) hovered between gigglesome and dreadful. Sean's truly disgusting jacket should have been fed to the flames and Rita should have known better. For some reason, these scenes didn't feel right - they were all just a little too out of the ordinary, especially the shoe-horning in of the seldom seen Doctor Carter and another odd post - "We'll Meet Again" cameo from Tommy.

Otherwise, the fire episodes were funny in parts (the previously blogged Peter Barlow line was pure genius) but also manged to feel a little clunky. The swift drafting in and demise of Toni was poor. Expendable, she sallied forth into the flames.

Even with fire raging, Tina still found enough venom in her to bitch about Kirsty, the latter of whom was spiralling out of control in a sour world of her own making. Meanwhile, a more beige than usual Stella was pulled from the wreckage and deposited in an ambulance. The medic advised that "She's in respiratory arrest" to which Gloria/Barbara Royle responded, Mrs Overall style, "Please tell me what's happening". 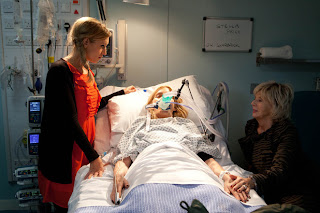 The medical updates continued at a pace Holby City would have been proud of. "They've sedated her. Perhaps they should sedate me an' all" moaned Leanne, yet again bringing the story back to her. She's definitely her mother's daughter. The episodes were peppered with weary dialogue from Emily about 'burnt tongues' (no idea what she was banging on about  . . .) and Gloria/Sheila Grant wittering on about Karl walking over hot coals.

However the best was saved for last, with those touching hospital scenes as Weatherfield General cured Karl of smoke inhalation within minutes, in order that he could continue emoting like a comedian in a 1970s working men's club. Meanwhile, Dev was doing a passable impression of Thomas the Tank engine reversing into the sidings, as he tenderly rubbed Sunita's scorched hands. She gamely slept through it all, grateful of the chance not to be boomed at by her increasingly odd ex.

The week's episodes held little excitement and few expectations and therefore I was not disappointed. They heralded the end of the Collinson era, the beginning of the end for the much-maligned Sunita and a new beginning for our favourite pub. If nothing else, let's raise a glass of Newton & Ridley's to that.

I agree completely with all of your comments! I thought it was just me. I found the entire strip show forced and not entertaining whatsoever. It was completely unprofessional for the local G.P. to be stripping off in front of women who could very well be his patients. I find Karl and Dev's behaviour bizarre to say the least. Why in the world was Karl in Sunita's room?? As for Toni and Paul I cannot believe trained firefighters would enter a burning building with no equipment whatsoever!