Alison can't understand how her daughter can lie so well. It probably scares her, too. She is even willing to leave her brute of a husband for her daughter providing she tells the truth. There's always conditions isn't there? Kirsty doesn't believe Alison would leave her husband. Kirsty screamed at Sally who was only subbing for Julie. There's another person who's going to start doubting Kirsty.  Kirsty was sharp with Julie after, and very clearly disturbed and on the edge and she hurled a cup against a wall right behind her. Eek! The facade is cracking and Julie's really worried now and she's starting to believe Kirsty really has been lying all along. She believes she can tell when anyone is lying. She may have a very good lie detector but i think her Irony Detector is wonky.

At the trial, Doc Carter testified about when he was called to Kirsty's at home after she fell over and his testimony wasn't all that helpful. Deirdre's testimony was obviously damning too judging from Fiz's verbal attack on her outside afterwards. Even Ken isn't in his usual neutral territory. Tyrone is more and more scared he's going to go down but his solicitor thinks his testimony will go over well with the jury.

Day two of the trial dawns with Kirsty alone, listening to the baby cry and going to see the doctor.  Can it be? Is she really going to admit the truth and get help? Nope. I wonder if her reaction gave the doctor pause for thought. Julie has decided to confront Kirsty and Brian is worried that Kirsty could lash out at her. And when she confronted Kirsty she sure found out the truth. The hard way. SMACK!! Julie ran to Sean next door. That's it. Game over and Kirsty knows it. If the walls are so thin at Eileen's that you can hear a baby cry like it's in the next room, surely all that palaver would have been crystal clear as to who was hitting whom!  Sean and Julie can hear Ruby clearly throught he wall. Did they not hear Kirsty screaming at the baby? But before they could form a firm plan, the noise stopped and when they checked, Kirsty and the baby were nowhere to be found. 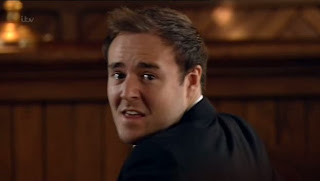 Meanwhile, Tyrone is testifying today. He told it like it was. He stood up and was honest about everything. He did bring up her losing her job and he also sort of defended her or at least tried to explain her behaviour as needing to make herself feel better. Ah, and the hospital report was brought up. I'm surprised Kirsty didn't go to the court to watch Tyrone's testimony. Tyrone was really believable. How could you not believe that little face and all those tears but he's not so sure he'll get off. Will he just give up and lie down or will he stand up and fight? The prosecution ripped Tyrone to shreds. She's focussing on the affair. Tyrone should have just stated the facts without all that protestations, he'd look much more innocent, calm and collected. It's true, it doesn't look good due to circumstances. We need the cavalry. And it arrived, except they're saying Julie's evidence isn't admissable. 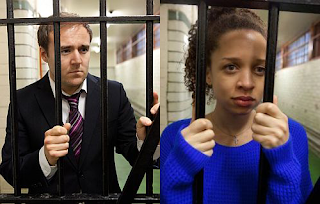 Help for Tyrone does come. Kirsty showed up with Ruby and is finally asking for help. She got so scared for the baby that she did the right thing, Oh i really hate it when everyone screams out in court. Let them take the baby, do things by the book. Fiz, shut up and sit down! She knows she's like her father and can't put her child through what she went through. The jury is excused because they can't unhear what they heard and the prosecution has decided to drop the charges and he's free and he has Ruby back!!! He looks like he can hardly believe it!

By the end of our week, it's the beginning of a new week in Weatherfield. The trial is over, Tyrone is free. Tyrone seems happy with Ruby but he's not ready to face the world yet. Fiz is still blanking Julie. Tyrone is harbouring resentment too and I can't blame either of them. Fiz is worried about Tyrone but maybe all he needs is time. His true friends are rallying round and threw a welcome home party for him.

Dev is furious that Stella is blaming Sunita but she's not really. She just answered the question about who had a grudge. Gloria has invited Karl to stay at Number 13 with them. Oh that's going to be cozy, Stella and Jason in the master bedroom and Karl on the sofa. Jason strongly suspects Karl and he's going to keep a close eye on him and told the police. Can't prove anything but at least it gives the police someone with more of a motive. He was smooth with the police. The thing about the police is, though, they don't discount anything. Karl was clearly rattled. Gloria, as always, is on Karl's side and it's going to push Stella and Jason apart.

Karl is quite happy with his feet under the table and hanging around the hospital like a bad smell and being all protective. Were the spare keys missing? We already saw Karl grab them the other day. And if the keys were just hanging behind the bar, anyone could have found them. They couldn't have been hidden that well. Ah but Karl still has the keys, there they are, unburned and in perfect working order. I think it's kind of creepy seeing Karl lurk around Sunita's room. He used the opportunity to put her burned fingerprints on the keys and plant them in with her things, removing her house keys because there would only have been one set of keys noted. Dev says she had her purse but she didn't. Still, she could have had keys and things in her pockets.

The hospital gang are discussing why Sunita was in the pub and if she lit the fire, why didn't get get out? Suicide? Not with those kiddies, no I agree there. Karl's taking it all in thoughtfully. The police are sniffing around Sunita's belongings and oh look, there's the spare pub keys, shock of shocks! Karl wasted no time planting more evidence and now everyone else thinks she's guilty. 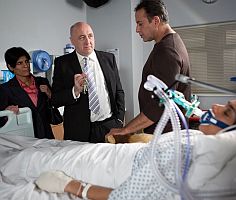 Dev defends Sunita but even he's having one or two doubts, and it's the same old thing isn't it? Everyone is willing to think the worst of someone they've known for years. Ok, Gloria, Stella, Eva and Paul haven't known her long but everyone else has and the gossip is wasting no time whipping itself around the street, especially now that Norris knows. Dev went to confide in Lloyd about all his troubles. You forget that Lloyd was a good friend to Dev after Sunita had left him last year. Lloyd speaks sense. Nobody knows for sure until Sunita revives.

Stella's home from hospital. I see Kevin painted Number 13 and it's not got that ugly pink decor anymore, thank heavens. Stella's now got two men doing her bidding but Stella seems to prefer Karl's company, pushing Jason out the door. Karl's on his best behaviour with Stella, too, even to the point of doing housework. He even finagled an evening along with Stella and got to console her when she had a wobbler. It's almost like old times, I bet he's thinking and he's taking full advantage of her vulnerability.

Dev is putting on a front for the children. I wonder what the right thing to do there is. They don't realize how seriously ill their mother is and if something happens, they'll have an awful shock but they're so young, maybe it's not the kind of thing you can prepare them for. Sophie's spending time with Sunita while Dev minds the kids. Who's minding the shop? Maybe he doesn't care. 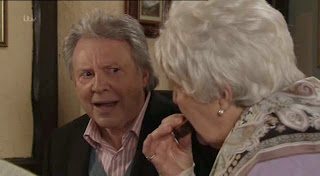 Seems like Sylvia got on well at the One O'Clock club. One of the members is another lollipop man, and knows Dennis. Seems Sylvia's trouble is arthritis, her wrist, that is. Stan has a frozen shoulder and has made "herbal" brownies. Dennis looked like he knew exactly what was in them! Dennis is thoroughly enjoying the brownie-gate. I kept waiting for the penny to drop with everyone else. Loved Sylvia getting all giddy with the dish soap and giving Roy a bubble-beard and getting the munchies. She was horrified once she found out. Another strike against the One O'Clock Club! Blanche would be rolling over in her grave!

Sylvia might have enjoyed the special brownies but has no intention of continuing on to drug addiction. Seems the One O'Clock club has become a hive of drugs! But her pain speaks louder than her actions. She should probably take them sparingly though. Sylvia is intent on those brownies. Stan keeps bringing her lots and every few days she gets another batch. How many is she speeding through? (pun intended) Anna sold three of them to Rita!

Paul is clearly not doing well and isn't really dealing with Toni's death. Eileen knows it and is worried but he won't be fussed over. Paul's heading back to work but Eileen doesn't think he's ready. Sounds like the management doesn't throw them back into it too soon either. Today is also Toni's funeral, a difficult day for Paul. It didn't help that he found out about Sunita.

Chesney is really down in the dumps with Kirk and Beth urging him to fight for his son. Now Chesney has lost his source of income. He's been late (hungover) too many times and lost his stall on the market. Ryan is still sniffing around Katy and Chesney catches them every time it seems. His solution? Get drunk. He's been doing a lot of that lately and he made an absolute tit of himself trying to chat up Eva. She put him down oh so firmly and most decidedly, without laughing out loud in his face too, more or less!

Drinking at the Bistro is going to be very expensive for a lot of the Rovers' punters.   I really do like Beth and Kirk together. Gary is getting kind of over-protective of Tina. And when they were sitting in the Bistro, they looked like good friends. But i'm a bit disturbed at the look on Gary's face. He looks like he's into her a lot more than she is to him. Tina is out of work and Owen is persuaded to give her a few more hours. She's got it pretty good, really. She doesn't have to pay rent. That's a big expense.