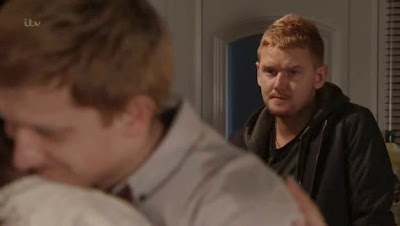 Your eyes say yes but your heart says no: Katy accepted Chesney's marraige proposal but Gary knows she's up to no good.

Cunning Plan: Karl used the bust pipe to switch off the lights and pretended the water fused them.

Nice Save award: Gail caught Sally out in her lie but Sally covered very well.

None of your business award: Is it Gary's place to thump Ryan for having Katy in the back of the van?

Oldest game in the book: Sophie set up Sunita and Dev to get them talking.

Tug on the heartstrings award: Katy has broken Chesney's heart.

Spirit of the Blitz award: Loved the oldies talking about the war and the old times and singing songs in the candlelit pub.

Stressed out award: Kirsty isn't dealing with the stress and a crying baby isn't helping any.

Too Little Too Late: Stella regrets sticking her nose into Dev's doubts.

Mea Culpa award: No guessing who started the fire, then. I never doubted it for a minute.

Swan Song award: Bluebirds of Dover marks the end of an era.

Lines of the week:
Jason to Karl "I didn't smash your window like you didn't torch me van" (point to Jason)
Jenna to Sally "Maybe you're gay but the penny hasn't dropped"
Fiz about Katy "She's a very lucky girl" (cut to Katy snogging Ryan)
Dev "Who's going to look after the shop?" (doesn't Sunita also work there?)
Chesney "Mr. and Mrs. Brown. Can't wait" Katy "Hmmmmmm"
Eileen "Do the show, Nick. You've only got a little part!"
Michelle "Bout time we had a bit of eye candy behind the bar"
Sunita "Shut your face Karl, you're just jealous, cause everyone has a happy ending except you"
Eileen "Oh Steve, don't worry. We've managed to find men with bulges in all the *right* places"
Gloria "If that's the Spirit of the Blitz, I'd take me chances with the Luftwaffe"
Sunita to Stella "St. Stella of Flamin' Weatherfield.... You're like Norris with bad roots!"
Gloria to Sunita "You broke up your kiddies' home, nobody else"
Jason "A Little Bird? Is that rhyming slang?" (HA!)