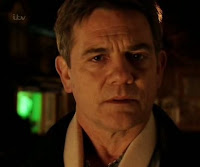 Doctor Doom award: Karl. Caused Toni's death. Left Sunita to burn and when that didn't work, killed her in hospital.

Need new shorts award: Looks like Sunita may be coming out of the coma. Karl's face went the colour of the ashes on the Rovers' site.

Doctor Sylvia award: Sylvia the pusher is in town.

Misplaced heroism: Karl did NOT save Stella's life, Paul did. He's the one went up the ladder and got her back down it safely.

It's not you it's me award: Stella insists Karl has nothing to do with her breaking up with Jason. Heck as like it is.

Me Me Me award: Stella is moaning about Sunita dying hating her.

Shoots yourself in the foot award: Eileen can't keep her neb out of Paul's business. If she's too scared, she'll have to end the relationship.

Lines of the Week

Sally "Sometimes I'm not a very good judge of character" (You can say that again)
Dev to "Morris" "Go knit at the guillotine or peddle your gossip elsewhere"
Norris "Asking after someone's health is gossiping now, is it?" (it is the way you do it)
Karl "It's always you. You ruin everything"
Tyrone "I'm glad I came so I could see you for what you really are"
Sophie to Karl "I reckon you've done enough, Karl" (more than you know)
Tina "I'm simply a womb with a view"
Sylvia "I have never been so insulted in my entire life" Rita "Well, that's a shame because I'm just getting warmed up"
Tracy "Would it kill you to pretend to be listening?" Ken "I was. Pretending to be listening"
Tracy "Just because we didn't break up a marraige doesn't make us less of a couple"
Mary "Cliches are cliches for a reason. Personally I avoid them like the plague"