Corrie A-Z: B is for Battleaxes 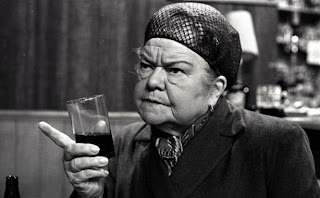 (This post was originally posted by Llifon on the Coronation Street Blog in April 2013.)

It could be said that Coronation Street provided the foundations for every archetype in British soap. And here we’ve got one of them – the battleaxe. A battleaxe is an old yet strong and domineering woman who has a sharp tongue and Corrie has portrayed that sort of woman since its inception.
Ena Sharples, portrayed brilliantly by Violet Carson, was the original battleaxe and held the mantle in the soap’s early years. From her first appearance to indeed her final appearance, Ena showed what a strong person she was, gossiping and not to be messed with. Known for her hairnet and double-breasted raincoat, Mrs Sharples often clashed with Elsie Tanner and Annie Walker and even argued with old pals Minnie and Martha and her relationship with her daughter Vera wasn’t great. When Vera died of a brain tumour in 1967, Ena was riddled with guilt over their strained relationship. Her finger was on the pulse with the street’s goings on and never missed out on any gossip. But as Carson’s health deteriorated, Corrie bosses realised that Ena wasn’t invincible and sought a replacement to fill the battleaxe’s shoes. 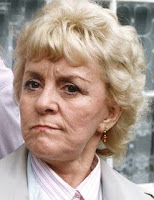 The mantle was passed to Welsh harpy Megan ‘Granny’ Hopkins, matriarch of the new family who took over the Corner Shop from Maggie Clegg in 1974. But she lacked the warmth viewers held for Ena and within the year the Hopkins family were axed and they’re long forgotten.
In 1979, Ivy Tilsley moved into the street and soon became the street’s harridan. She despised her new daughter-in-law Gail who’d married golden boy Brian. Soon enough she was nicknamed ‘Poison Ivy’. Ivy would enjoy a 15 year rivalry with Gail – mainly over Brian or the welfare of their children Nicky and Sarah Louise. Indeed, Ivy’s interference ultimately led first hubby Bert into an early grave and wrecked her second marriage to Don Brennan. She detested the fact that Gail had found romance and married Martin Platt so soon after Brian was stabbed to death and believed that Martin was taking over the Tilsley family. Ivy was also a nightmare in her job at Baldwin’s factory and often clashed with Mike and Elsie Tanner over the rights of the workers or over pay. Ivy’s interference in her grandchildren’s lives led her to become isolated and she found solace in the bottle and later left the street to a religious retreat where she died in 1995. 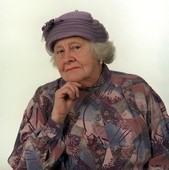 As Ivy Tilsley’s reign as the battleaxe of the street came to an end, wheelchair bound OAP Maud Grimes stepped into the breach. Always wearing a hat, Maud was wary of the men in daughter Maureen’s life and none more so than Reg Holdsworth. Maud had succeeded in quashing their relationship back in the 1960s but when the old lovebirds reunited in 1993 they rekindled and married, despite Maud’s attempts to stop them. When the Holdsworths divorced, Maud was relieved. But Maureen’s choice of third hubby didn’t please Maud either – booming butcher Fred Elliott. But luckily that marriage only lasted a week! 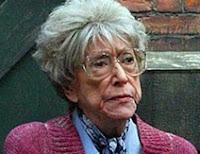 By Maud’s departure in 1999, another battleaxe had arrived. Acid tongued Blanche Hunt returned to live on the street after a hiatus of over twenty years. Back in the 1970s she was flighty and loved life, but now we saw a grumpy old woman. Famed for her one-liners and put-downs of the neighbours and her own family, Blanche became a Corrie favourite. But she sometimes showed her tender side. For ten years she held the battleaxe mantle until Maggie Jones, who played her, sadly passed away.
Currently holding the battleaxe torch is Roy Cropper’s mum Sylvia Goodwin. Not to be messed with, she holds an iron rod over goings-on in the café.
Who do you think has the making of a future battleaxe? Gail? Eileen? Sally?