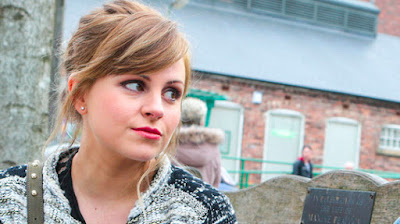 Pictures released by ITV today show Sarah Platt being knocked down on the cobbles by Tim's van. She looks in a bad way and will be taken to Weatherfield General for treatment - where she's given the shock news that she's pregnant!  It's Callum's baby, of course...

Sarah's hit by Tim's van after she goes on a date with Aidan Connor. Actor Tina O'Brien, who plays Sarah tells the Express: “It’s awful; it’s the worst date in history! She’s not ready for it. She’s trying to prove a point: ‘I can do this, I am happy’, and she tries to mask her insecurities with alcohol. She ends up very drunk and Aidan is not impressed.”

Tina says that she took acting tips from Alison King, who plays Carla Connor, when she was told that she'd have to act drunk on set.

“She told me something very interesting, which I tried and it did really work,” Tina reveals to the Express. “She said I should spin around in a circle, just before we filmed the scene. It made me really dizzy, but it helped, because it sent me off balance. So you then concentrate on trying to focus yourself a bit more, like you would do if you were really drunk.

“Sue Cleaver [Eileen Grimshaw] was in the scene with me and she was laughing her head off, because five seconds before they began filming I was spinning round and round on the spot. She thought I was mad! Hopefully it helped, but it was hard; I don’t know if I’ll be watching those scenes to be honest!”

Have you had any word from the CBC about the viewing dates and times over the holidays? I see that the program will not be shown on Xmas Eve & Xmas Day, but 2 episodes each will be shown the following Monday and Tuesday. What I haven't yet seen is what will happen on New Year's Eve and New Year's Day, as well as the following week. Also, ITV has added some extra episodes lately and the CBC hasn't shown any additional ones in Canada, so once again we're slipping a little farther behind. Any word on that?

I knew about Christmas Eve and Day, hadn't heard about the extra eps the next week. Thanks. All I can say is keep checking the online listings, that's pretty much what they convey to me, too. CBC doesn't often air extra to catch us back up but it does happen.

I believe ITV may have gotten behind when they were showing 'footie'. Not sure if they made those up in Britain.