A Christmas Card from Weatherfield 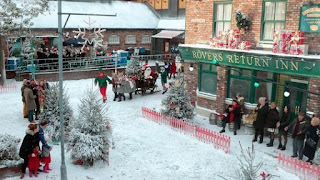 (This post was originally posted by Emma Hynes on the Coronation Street Blog in December 2015.)


As the muted daylight of another Christmas Day dissolved into evening, and our fairylights and firesides became all the brighter, we and the residents of our favourite fictional street invited one another into our homes via an hour long installment of Corrie.

There are many ingredients that go into creating a magical Christmas, and the care and attention with which this episode was crafted by writer Julie Jones and director Judith Dine brought us just that, capturing the spirit and the essence of the season.

In addition to the authenticity of the cosy, festive homes, Tyrone’s successful attempt at transforming the street into Lapland for Hope reminded us of the important things in life; friendship, community spirit, love, support, the collective creation of special memories, and the happiness that something beautiful can bring. Like a card, Weatherfield’s white Christmas adorned the episode’s cover, while the storylines unfolded within and, as is fitting for the festive season, love was at its core, for better or worse.

We saw Tyrone and Fiz get engaged, a rather lovely moment between Kevin and Anna in which they nearly kiss under the mistletoe, and Kylie seduce David in the Rovers. 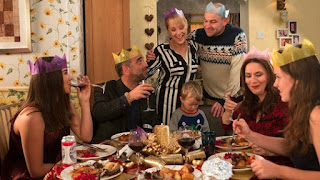 Anyone paying close attention to the script will have noted its sprinkling of innuendo, and this made a welcome transition from talk to action in the case of Tim and Sally who spent the day trying to fit a bit of nookie in between the sprouts and charades.

I normally don’t like episodes in which residents hobble across the cobbles barely able to restrain themselves long enough to get inside the door, of which we’ve seen more than a few, but it worked on this occasion as it fitted with the playfulness and romance of the episode.

Where matters of the heart are concerned, we know all too well that love can give rise to pain, and this was felt keenly by Mary who, sitting beautiful in the glow of a plush hotel, learned her hardest lesson as she was stood up by Brendan. Sinéad was deflated on realising that the engagement ring which popped from a cracker was not intended her, but rather Fiz, and it appeared as if Johnny’s heart would give in as Carla answered the phone to Rob, but his secret remained safe as brother and sister spoke for the first time since before his arrest.

Finally, Tracy got her comeuppance as a disgruntled Robert snapped the box shut on his proposal and revealed to the Rovers that he had intended asking her to marry him, but that her prison visits to Rob and declaration that she wanted to spend the rest of her life with him, had put paid to it.

It wouldn’t be Christmas without a Rovers brawl, this time between Leanne and Tracy, but it was all rather amusing which ensured the episode remained light on the drama.

There was plenty of platonic love about too as friendship and family rested firmly at the heart of this special. The Platts managed to forget their woes for an hour which resulted in an amusingly typical Christmas family scene, and the action around various Christmas tables was suitably jovial.

Even in its saddest moments, we were heartened by the support the characters received from one another, particularly Mary whose tissue-like pretense at having enjoyed a lovely afternoon with Brendan gave rise to worried faces on the parts of Rita, Norris, Emily and Dev. We also saw Todd show concern for Tracy, and Beth give her a hug after she was thrown out by Ken for her deceit while the latter comforted Robert. 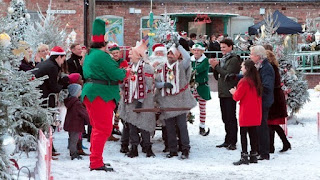 The dialogue sparkled with humour throughout, one of the highlights of which had to be ‘vegetarian’ Nessa getting caught tucking into the turkey and mumbling at Amy to get her purse to pay the princely sum of £10 in return for her silence.

We always speak of the suspension of disbelief that is required in order for a viewer to invest in a soap opera. On this occasion, it was absolutely essential, not just because in order to enjoy it to the full you had to, for example, forget about Callum, or whether or not you think Kevin is a good match for Anna, but because there was a point at which we transitioned from the actual business of the episode to scenes in which it was as if the characters were serenading us, the viewers, with the help of a brass band. In this distinctive episode, the characters rose out of the drama for a time to convey a special message; our street is your street, we are part of your lives and your homes, and we wish you a Merry Christmas.

People have complained about the proliferation of nastiness and high drama in Coronation Street over the past couple of years. While we've all spent time on the edge of our seats courtesy of some brilliant storylines, we called for more normality, community spirit, good-natured humour and action deriving from the hum-drum. This was Coronation Street’s Christmas present to us this year, and it was lovely. For me, we couldn't have asked for a better message at this time of year than that there is beauty in the normal, and at the heart of everything is our humanity.

I hope you, the readers of Coronation Street Blog, are enjoying a peaceful and Happy Christmas, and thank you for reading throughout the year.