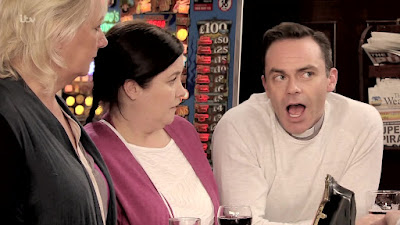 Speculation Street: The gossip mill doesn't know the truth about Carla's parentage (yet) but that doesn't mean they can't make something up!

Voice of Reason award: I love that Eva was able to talk to Aidan. She does know how it feels when a parent has lied to you all your life.

Fire Fail: That was an awful lot of fire for a dozen or so letters in a metal bin and it spread like everything was soaked in gasoline.

Contrivation Street: So a few hours through the morning, the Council had that whole mural completely cleaned off without anyone at all noticing the workers or a van that they likely had parked out on the street? Not even anyone that works in the pub and is probably in and out all the time with crates and deliveries and things? I think not.

Soft Spot award: Norris doesn't often show his softer side, but he does still have that soft spot for Maddie.

Lines of the week
Tracy to Ken "And you and Nessa are the new Posh and Becks?"
Liz to Sean who was earwigging "This is a private conversation" (then don't conduct it in the middle of a pub!)
Mary "I suppose you two are becoming a moralistic double act, now. A sort of disapproving Sonny and Cher"
Erica to Anna "You mean you have no gossip that I'm not supposed to know?"
Carla "I knew it would open a can of worms but not one this big"
Sophie about Joanne's manicure "Was they nails or was they claws?"
Joanne "I thought I'd found a decent man" Anna "Oh no, he is decent, he just can't say no to other women" (HA!)
Craig "Art will always divide people"
Dev about his new gym top "It's like muscle compression gear" Aadi "Don't you have to have muscles for that?" (out of the mouths of babes!)
Kate "I dropped the F-bomb (family). Better get used to it"
Nick about Robert "The last thing that man needs is a huge ego boost"
Michelle "I love Steve and I wanted to spend the rest of me life with the great lummox"