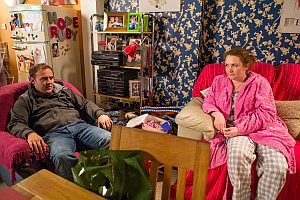 
Carla's guilt mounts but she sets a date and makes wedding plans. Robert and Nick clash over the Bistro with a deal at the end of it. Hope's operation was a success but Fiz discovers the debt they're in. Kevin and Anna date in secret. Will Sally catch them? Tracy's new shop opens. Tracy tries again to get Rob back but overhears a secret. Roy has to make a brief journey. Luke and Andy make things difficult for Jamie who is out on bail. Ken asks Audrey out.