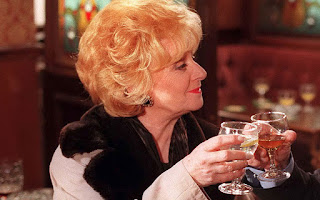 (This post was originally posted by Flaming Nora on the Coronation Street Blog December 2015, reposted to this blog with permission.)

Whenever there's "research" in the news about soaps I'm always very interested to know which organisation has conducted it.  This time it's the Bottled Water Association who today say that Coronation Street characters drink too much booze.

The Natural Hydration Council (aka the Bottled Water Association) monitored more than eight hours of soaps to find out if characters set a good example by drinking water.  Unsurprisingly, they found that wine, beer, champagne, spirits and cocktails were shown six times more than water on Corrie and EastEnders.

That's probably because one of the sets in both soaps is a pub, where the majority of the action takes place and has done, in Corrie's case for over 55 years.

The 'study' found that in scenes featuring Rita on Coronation Street, she had a gin and tonic on six out of ten occasions, vodka almost three out of ten and hot drinks for one in ten. Sally was seen with white wine for 86% of the time. 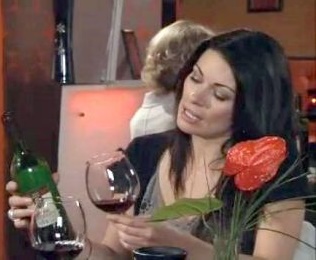 Did they not even catch a single glimpse of Carla Connor and her penchant for red in any of these eight hours they monitored?