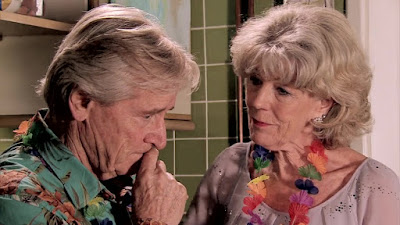 Mercenary award: Amy offered to help her mum clean up the shop. Because she wanted extra pocket money! 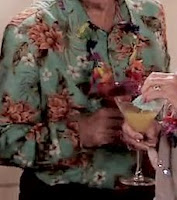 Continuity award: If Roy keeps the cafe closed on New Year's Day, I absolutely do not believe he'd have left the door unlocked so anyone could walk in.

Adventures R Us: Emily, for being full of the adventurous spirit.

Accident Waiting for a Place to Happen: Carla and Robert.

Time worn tradition: The Corrie go-to gesture when you've been ticked off in the pub. 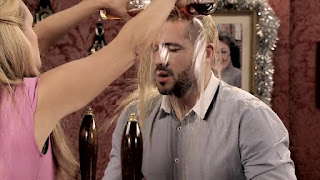 Phrase of Doom award: Michelle for assuring Nick "She wouldn't do anything to jeopardize you and her" (oh yes she would)

Secrets and Lies award: Carla's keeping a big secret from Nick. Roy's keeping a pretty big one from Cathy.

Hypocrite award: Ken, the serial cheater, has no place being outraged that Nessa had an affair with Cathy's husband.

Powerhouse scene: Rob and Carla. Rob might think he had the upper hand but Carla scored as many points or more. What a fantastic pair these are, very believable as siblings. 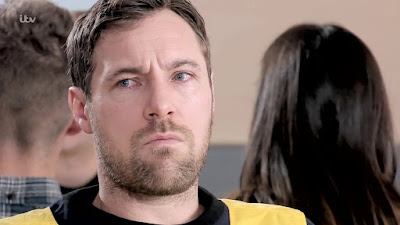 Lines of the week:
Tracy "Every single person in that house snores. It's like trying to sleep in a motorbike rally"
Amy "I'll help you clear up" Tracy "Awww would you?" Amy "Of course. I could use the extra pocket money"
Amy's advice "Keep saying sorry and being extra good. It always works for me"
Audrey "I'm not saying you shouldn't be happy. Just make sure you're being totally true to yourself"
Zeedan "Why are you both looking weird?" Leanne "oh Thanks, I think you'll find we were both looking thoughtful!"
Todd to Zeedan "I suppose a cuddle's out of the question" Zeedan "You know I'm a black belt don't you?" Todd "As you were"
Nick "I don't suppose social niceties count for much if you're a convicted murderer"
Eva "I'm not going to jump in feet first like I normally do" (Isn't that what you just did?)
Liz "Hello, Hello!" Tracy "Oh great, who invited the Ghost of Christmas Past?" and "It's like an episode of the Golden Girls in here" (Oh i had to laugh at that one)
Mary "Selling ice creams on a beach in Acapulco might sound all sunshine and bikinis, but there's a dark underbelly"
Luke "All Maria sends me are selfies with donkeys in the background" Sophie "Maybe that's all you deserve!"
Tracy "When Robert sees what a blooming success this place is, he'll realize what he's been missing out on"
Mary to Rita "You'd like that wouldn't you? The chance to gallop into town on a horse named I Told You So"
Erica "If at first, you don't succeed..." Anna "Open up a box of chocolates and have a good cry|