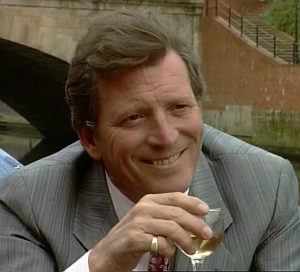 In this week's awards, I mentioned the Darth Vader Effect relating to Johnny discovering he is Carla's biological father. She'll find out soon enough. This isn't the first time it's happened on Coronation Street and is a fairly standard soap plot that rears its head every so often.

On Coronation Street, Mike Baldwin is the king of the Darth Vader effect, with all three of his sons discovering who their biological father was and Mike knowing about only one of them. Most often it's the fathers who discover previously unknown children because mothers know they've given birth. It's hard to keep that fact from them though if a baby was switched in the hospital, they may not realise the child they raise is their own. But let's not get into that!

Other typical soap scenarios include an older sister or aunt who is really the biological mother of a younger sibling/nephew/niece, or a close relative who is the biological parent, usually father, of someone. We've had the latter in Fred Elliott with his son Ashley but I'm not sure we've had the former situation.

Curly Watts discovered a daughter, Ken Barlow discovered a son (and grandson), Leanne found her mother. For more detail on all of these, and more, see State of the Street.

Can you think of any others I might have missed?

Yes they were, I did mention that in the State of the Street full article.