David Neilson and Chris Gascoyne as you've never seen them before 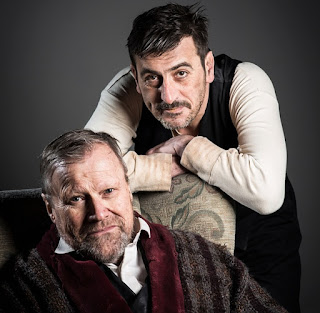 As we revaled here on the Coronation Street Blog some months ago, David Neilson is taking a break from Coronation Street and his role as Roy Cropper.  He's acting in a Beckett play with Chris Gascoyne, who played Peter Barlow.


There's a preview interview in today's Guardian with these wonderful picture of David and Chris dressed as the characters they'll play in the stage show, Samuel Beckett’s Endgame.

Davd plays Hamm, tyrannical master of the servant Clov, played by Chris.  Endgame, first performed in 1957, has been acclaimed as a tragicomic masterpiece, but is sometimes seen as a “difficult” and alienating play.  We'll be bringing you blogger reviews of the show from both our bloggers Emma and Stevie. 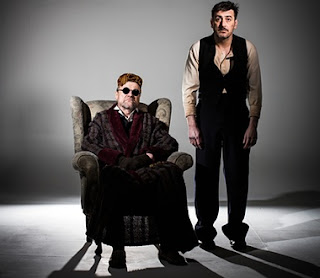 Chris Gascoyne tells the Guardian: “Hopefully me and David, having been in Coronation Street, will bring in an audience who have maybe never been to the theatre. They may run out screaming and want their money back. But we shouldn’t underestimate people. Beckett is for everybody. He isn’t middle-class, highbrow theatre. He’s just not.”

Gascoyne, 47, first encountered Beckett while he was a drama student. But it was the death of his elder brother, Ray, from cancer 21 years ago that deepened his understanding – and love – of the writer’s work. During his brother’s final illness, Gascoyne returned home to Nottingham to help his parents look after him. He remembers the long nights, the pain, and how his mother, when Ray died, cradled and rocked him back and forth; when the undertaker came, Gascoyne had to remove her arms from around his brother’s body.

“When you see things like that, you never forget them,” he says. “Endgame, afterwards, had a resonance of all that for me. I found it deeply funny, uplifting and, at the same time, tragic. I didn’t know this until recently, but Beckett wrote the play after he had looked after his own brother, who passed away from cancer.”

There’s a famous line from Endgame: “Nothing is funnier than unhappiness.” Does Gascoyne agree? “Yes. When my brother was ill, we never laughed so much in our lives than at the most dreadful points, because laughter was all we had.”

Given that the material is so personal to him, will he feel the emotion on stage intensely? “I already do. I feel very close to Ray when rehearsing. I can feel that little room we were in for a year. Death is very close in Endgame. It clings to all the characters. You can smell it.”

David Neilson discovered Beckett as a teenager. “I left school at 15 and worked as a gas fitter,” the 66-year-old recalls. “One day, I went into Loughborough library, saw Waiting for Godot on the shelf and stood there and read it all the way through. I didn’t even know how to pronounce Godot, but I was so interested.”

It was one of the texts Neilson discovered en route to a new life as an actor. He has taken three months’ off from Coronation Street to perform in Endgame. His last stage appearance was eight years ago as Lucky in Godot, a character who bears more than a passing resemblance to his TV alter ego . “Lucky is Roy,” Neilson says, laughing. “He’s got his bags, and the cares of the world on his shoulders.”

So how does he feel about those who snigger at the idea of soap actors taking on such a serious writer? “That’s just snobbery, isn’t it? It’s all about keeping you in your place. If I’d have listened to all that stuff, I’d still be a gasman.”

The suggestion that they appear alongside each other in Endgame came from Gascoyne. The idea, initially, was simply to read the play together as a way of recharging actorly batteries running low after years on the Street. For one backstage reading, during downtime between shooting Corrie scenes, they were joined by fellow cast members Stephanie Cole and Malcolm Hebden, raising the delicious fan-fiction prospect of an Endgame featuring not only Peter and Roy, but Sylvia and Norris, too.

Make no mistake, however: there is no dilletante-ism about this production, no whiff of soap. “We’re not f***ing about,” Gascoyne insists. “This is an important thing. It’s life!”