Rob Vs. Robert, who's the best one for Tracy Barlow? 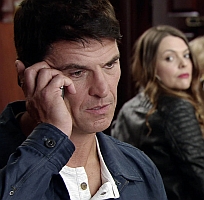 The news that Rob Donovan is coming back to Coronation Street later this year got me thinking. Right now, Tracy is all loved up with the return of her ex-husband, Robert Preston. Yet, just a year ago she was preparing for her wedding to Rob Donovan. Rob was discovered to be a murderer and Tracy dobbed him in to the police. She did the right thing but her heart was broken.

This year, her mother died and her ex came back for the funeral, exclaiming that he's carried a torch for her all these years. That's a heady sort or flattery and Tracy was grieving and vulnerable and needing comfort. I see Robert Preston as a kind of rebound relationship. She certainly hasn't harboured secret feelings  all these years for him, after all.

I know that Rob probably won't be getting out of jail and will only be around long enough to stir up Tracy's emotions and cause some ructions between Rob and Tracy, most likely. But that aside, I still think Rob is a better match for Tracy, what do you think?

Read more about it on State of the Street.

Definitely Robert but I don't think Tracy is ever going to achieve true happiness do you? She'll always be punished for all the bad feelings she spreads.