With Coronation Street's current focus on the Who Pushed Ken? and Bethany's grooming storylines, a few of the regulars have been squeezed off screen for a while.

Let's take a look at those Corrie characters who are currently missing in action and try to find out where they are.

Eileen came back from her holiday after staying with her sister Julie. And then... she disappeared again. We know she's around somewhere, possibly out shopping for yet another leatherette handbag. Come on Eileen, show yourself! 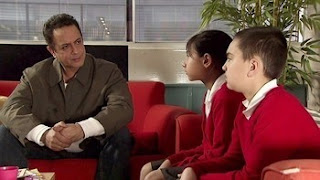 Dev, Erica and the twins haven't been seen on screen for a while. Erica made a fleeting appearance with Kev Webster, prompting a blog post asking if there was a possible romance on the cards between the two of them. You can read more on that here.

If we can't have more Dev and the twins at the moment, then please, Corrie, don't deny us more Erica, she's great!

Yasmeen Nazir hasn't been seen for a while. Is she hiding out at the Community Centre? She hasn't even popped into Roy's Rolls for ages.  Where's she gone?

Cathy's nephew Alex hasn't been working in Roy's for some time.  The actor who plays him is appearing in a stage play next week - you can read more on that here - but do we know if he's returning?

And nosy Norris hasn't been on the lookout for gossip from behind the counter in the Kabin. Where's he gone, eh?

Much as I love a big story line, I do find I'm missing the subtlety of these regular character appearances.