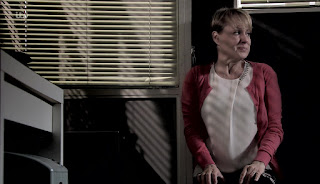 There were some big things going on in April on Coronation Street. Sally was trolled mercilessly, leaving her a shaking shadow of her former self. Ken is also in the same boat, nervous of being out and around his family.  The police keep changing their minds about who to charge for Ken's attack and are now focusing on Tracy but Tracy's got other things on her mind. Rob Donovan has escaped prison and she's helping him get away and seems about to go with him, dragging Amy along.

Michelle has taken Leanne's job and taken Robert into her bed while she aims divorce papers at Steve. Toyah's determined to be a mum even if Peter's life is in tatters due to the false assault charges from Chloe. Bethany is in way over her head as Nathan's manipulations have only just begun. I have a few questions about that storyline. Like, if Sarah is so worried about getting her away from Nathan, why hasn't she told the rest of her family and a few of the larger, more aggressive men on the street? None of them would stand for a predator grooming a sweet young thing. I want to see Luke, Kevin, Phelan, Robert, Steve and David go after Nathan along with Gary. If the police can't do anything at this point, the local posse sure can.

All this and more on State of the Street.