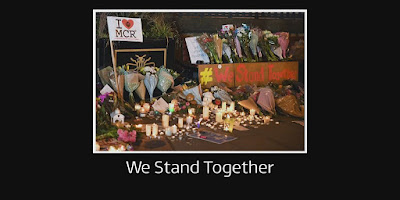 This just in from the official ITV Coronation Street website.

"In memory of our friend Martyn Hett and the all victims of the Manchester bombing on Monday night we will be dedicating a bench on the Coronation Street set to remember everyone affected by the atrocity.

The dedication will be planned in the coming weeks following an outpouring of affection for 29-year-old Corrie superfan Martyn and all those who lost their lives and have been injured following the Manchester Arena bombing.

The bench will be positioned in the new extension to the Coronation Street which is in the early stages of construction at the programme's Trafford site and the transcription will be as follows:

For Martyn and all those who lost their lives on 22nd May 2017. We Stand Together."

Email ThisBlogThis!Share to TwitterShare to FacebookShare to Pinterest
Labels: manchester