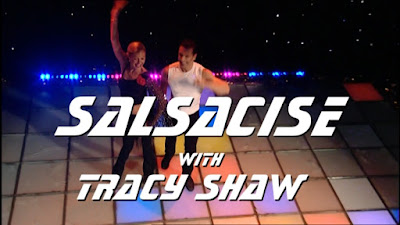 Gemma and Michael over at Conversation Street, the Corrie podcast, have been keeping fit the Corrie way! 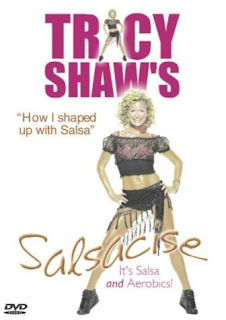 With these famous words, serial killer Richard Hillman bashed poor Maxine Peacock's brains in with a crowbar, ending her time on this mortal coil and sending her hurtling into what we imagine to be some kind of disco-themed hell for all eternity. Or, to put it another way, the set of Tracy Shaw's Salsacise. 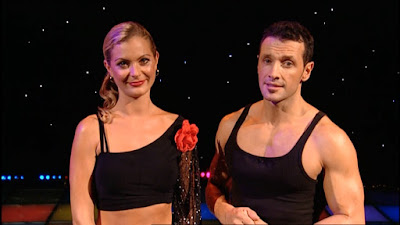 We jest, of course - the subject of our weekly Keep Fit With Corrie review is actually quite an enjoyable little exercise routine, although there are definitely parts where it takes no prisoners when it comes to the complexity of some of the moves! Seasoned dancers, naturally, will have no problems with even the most complex of steps here, but if you're new to this whole 'dance yourself fit' malarkey(or just generally uncoordinated), there may be a few bits of arm and leg movement where you'll struggle to keep up. 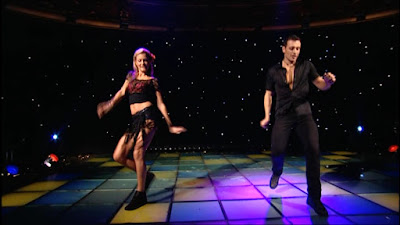 Clad in a variety of sexy outfits accessorised by a large red rose, Tracy certainly looks the part as she shimmies and shakes her Rear of the Year '96 winning booty across the colourful nightclub floor. The bubbly personality and big smile that made her such a well-loved character during her time on the Street shine through here, perfect for encouraging you to keep up with the Latino-inspired moves. 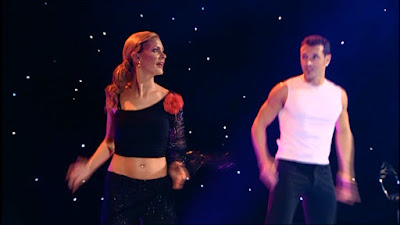 Joining Tracy under the disco ball is her Aussie partner, Michael. This, of course, provided much amusement for us, as Tracy gushes about how wonderful her 'lovely Michael' is, but in the - let's face is, highly likely - event that you're name *isn't* also Michael, this probably won't be so big a selling point for you... Fortunately, though, Tracy's Michael is a pretty decent trainer, encouraging you to keep up all the way through and giving ample warning for when there's a change of step on the way. The chemistry between the pair sizzles - an important factor when it comes to how much we tend to enjoy these DVDs. 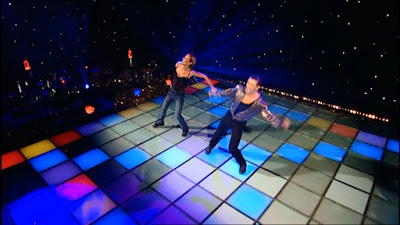 As for the workout itself, Salsacise is broken down into six sections, including
ten-minute warm up, a handful of dance routines, ab work and a cool down. Some of the moves learned in the warm up are revisited in later segments, whilst the ab and cool down parts seem rather short (4 and 6 minutes, respectively). Honestly, we should probably dock the DVD a few marks for the latter point, but abs and cool down always our least favourite bits anyway, so we were secretly pretty pleased when the ending credits came along earlier than expected the first time we tried it out! 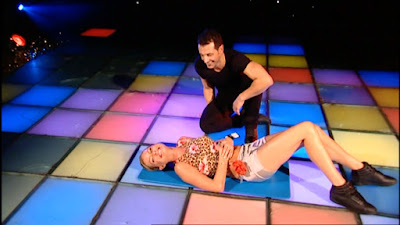 The main dance segments in the middle (9 minutes each) have you repeating a selection of moves over and over again until you've got yourself a nice little routine going on. They're fun to do, having you constantly moving to the up tempo salsa beats and only feeling slightly repetitive by the end of the segment. What's more, aside from the odd difficulty spike mentioned earlier, they're relatively simple to keep up with, too. Did they get us out of breath? Yeah, a little, but we always say that it's important to enjoy your exercise regime if you've got any chance of sticking to it, and this is always a good one to put on if you know you need to do a workout but are struggling to muster up the motivation.

Tracy Shaw's Salsacise is neither the best nor the worst Corrie-themed exercise DVD on the market. If you love a good dance, though, or if you've been hankering after a bit of Maxine on your telly since her 2003 bludgeoning, we would heartily recommend giving this a go.

To find out more about our podcast, search for Conversation Street on iTunes, or go to conversationstreet.podbean.com. If you want to follow Gemma’s blog, all about her fitness journey, and her love of food and fashion, head to www.foodfashfit.com