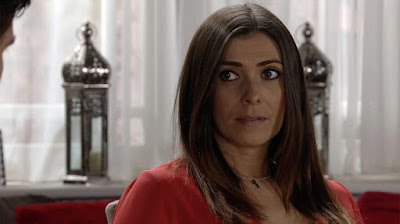 There's a good interview with Kym Marsh in the Radio Times this week in which she taks about Michelle's dramatic summer. She says: "It won't be easy going for her and Robert"

But first she reflects on the storyline which used her own real-life experience as a source of inspiration, the death of pregnant Michelle’s son Ruairi at 23 weeks.

“I totally understood why they wanted to do it. And I was told in no uncertain terms that I didn’t have to be involved. But I felt in my heart that it was the best way to educate and help people. I wasn’t prepared for how big the impact was going to be.

"It exceeded our expectations and we were all taken aback. I think people appreciated that we touched on that subject because it is such a taboo. It’s uncomfortable talking about the loss of babies; nobody knows what to say and they think it’ll get better if they don’t discuss it. But it was opening up as a family and speaking about it that got us through what happened to me.”

Kym also praises the new Coronation Street Producer, Kate Oates: "I think the show’s been brilliant since Kate’s come on board. The writing has been wonderful and the subject matter feels very current – look at Bethany’s grooming and Sally’s trolling; these are issues that affect real people. And Coronation Street is also in really good shape. There’s a lot to be excited about. We’ve come out fighting and that in itself is a cause for celebration.”

Vote for Coronation Street in the British Soap Awards