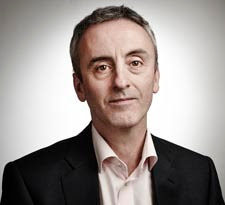 One of the many Corrie projects Kieran oversaw as part of the fiftieth celebrations was The Road To Coronation Street, which told the amazing true story of the birth of Coronation Street. The film was shown on BBC4 to huge critical acclaim and has since picked up several prestigious awards including BAFTA and RTS awards for best single drama and a gold medal at the New York Film and Television Festival.

I'm very sad to read the news today about Kieran leaving. In all of my dealings with him he has been extremely fan-friendly and I wish him well in whatever comes his way next.   As yet, we don't know who will be appointed to replace him.

Kieran said he had been thinking about leaving for more than a year, but had put the decision on hold when Coronation Street announced the production of a sixth weekly episode last summer.

“When the move to six episodes was announced I knew I should stay to help make that happen,” he said.

“This has been a huge and very difficult decision and it’s one I have been thinking about for more than a year.  I’ve been incredibly lucky to have worked on so many wonderful programmes and with so many brilliant colleagues during my time at ITV. Coronation Street is a special place and it’s been a huge privilege working on such an amazing programme with the greatest team in television.

John Whiston, Managing Director of Continuing Drama and Head of ITV in the North for ITV Studios, said: “Kieran has brought to both Coronation Street and Emmerdale his unrivalled eye for story and character and his own particular humour and humanity.

“You’d be hard pressed to find anyone in ITV who doesn’t deeply respect and admire Kieran. He’s one of the most conscientious, hardworking, clever and humane colleagues one could ever hope to have.

“Ally this to one of the keenest editorial eyes in the business and you have the consummate television executive. ITV has been fortunate to have him devoting his incredible energy, talent and his working life to the company for as long as he has.”