A Requiem for Andy Carver

(This post was originally posted by Ruth Owen on the Coronation Street Blog in November 2017, reposted with permission.)


There is much attention on Phelan and his dastardly dealings, at the moment, along with speculation as to who might be his next victim. But, I’d like to take a moment and reflect on the life of Andy Carver.

When Andy was shot dead by Phelan, he was 32 years old. He was in the early summer of his life and if he had been released, his joy and relief would have made him live a good and happy life, his imprisonment having most surely shifted his perspective as to what is important in this life.

To have your freedom snatched away, to live in a filthy damp cellar, in almost solitary confinement, apart from the odd, brief exchanges between him and Phelan, his jailer, not having any idea as to when or indeed if, you will ever be released, must be one of the cruellest punishments.  This, as well as knowing that the world continues to turn without you and that your chances of joining the society you were so cruelly removed from must be diminishing with each passing hour. Deprived of comfort, light, warmth and company, it is a testament to Andy that he survived it all for so long. Phelan did bring him food and medical supplies intermittently, but no promises were made about Andy’s chances of escape. 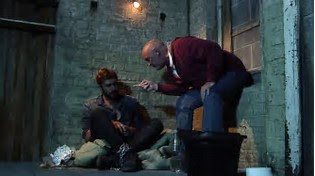 Andy must have craved contact with the outside world and when a chance appeared, Andy promised that he would say nothing to the police about Phelan and what had happened. A plan was hatched, and Andy would be released. Andy’s mixture of fear and relief was almost tangible. But Phelan, nothing if not cunning, staged an  ‘escape’ and crashed the van, ‘allowing’ Andy to run to freedom. According to Phelan, Andy had failed his ‘test’ and was recaptured. It’s hard to imagine the state of Andy’s emotions as he felt freedom was his, only to find himself recaptured and back in the cellar, chained up. Devastating.

Andy, I’m sure, will have thought of his beautiful girlfriend Steph, played by the stunning Tisha Merry. The plan was that they would meet at the airport and fly to Portugal. Phelan intercepted the plans and sent a text from Andy’s phone saying that Steph was better off without him. Poor Steph and poor Andy – both ensnared by Phelan and ensuing misery for both.

On his discovery that Nicola was his daughter, it seemed as if a change for the better was imminent in Phelan. Andy suggested the idea of the replacement prisoner, which Phelan thought initially, was ridiculous. He then had a rethink and thought it would be a good idea to capture Vinny, the man who ran off with the money after the flats fraud. Andy must surely now have been thinking that his freedom was but hours away.
Instead, Andy was forced to murder Vinny, and then, after all that time, hopes dashed, then renewed, time and time again, Phelan shot and killed Andy. Andy pleaded for his life, ‘Because underneath it all you’re a good man and no murderer.’ These words rang out hollowly for Phelan.
Phelan would never have taken Andy at his word, so in Phelan’s head, there could only be one solution for Andy. This was heart-breaking – bad enough that he had been held in a cellar for months, but to then be murdered is just too unbearable.
Did we, as viewers, really believe that Phelan would allow Andy to be free? I believe we hoped he would, but in our heart of hearts, we knew that Andy was doomed, once caught in Phelan’s web, the man who watched dispassionately as Michael Rodwell lay in front of him breathing his last and making no effort to help.

So, Andy, really sorry for the lost months there in the cellar - you suffered so horrendously and so sorry too for the years you should have had, growing into middle then old age, possibly with the wonderful Steph. All hope is gone now. Rest in Peace, Andy Carver, and if there is a heaven, I sincerely hope you get there.

Except Andy might still be alive... Look, I'm not saying I have any inside information, but consider two things.

1. The camera angle we immediately see after Phelan shoots Andy. The camera is looking up at Phelan, as though we're looking through Andy's eyes.

2. The camera angle when the bodies are dumped in the river. Once again, it is as though we're looking through Andy's eyes under the water.

Andy could have been playing dead or merely unconscious. I can't say anymore than that. Just think about it.

Christopher Oates: Please see CBC's deleted scenes for Corrie for November 9th. There is no doubt that Andy is dead.