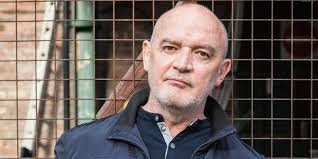 Why did Phelan decide to promise Andy freedom in the first place?
If he could get Andy out of there without any risk to himself, he would. But now he realises he can’t trust Andy so he has to think, 'Now what am I going to do?'

So Phelan comes up with the plan of finding a replacement hostage?
Phelan thinks if Andy does something as bad as what Andy has on Phelan then Andy can’t ever go to the police so there is a certain logic to it. As the pressure is mounting, he starts looking at Nicola, Anna, Daniel and all the other people that he has encountered because Phelan never forgets an injustice or an injury to him. So who knows how many people from his dark and distant past he could be thinking of but certainly there are a lot of potential replacements aren’t there?

Could this be the week that Phelan gets his revenge on those who have wronged him?
Yes, if he is thinking about a replacement it must be like a Smörgåsbord for him at the moment.

Phelan is usually very confident in himself. How confident is he that he won't get caught this time too?
He is feeling the pressure but that is when he acts, that is when he is at his most dangerous. When things are all cool, we see him very benign. But when the heat gets turned up for him, he gets more decisive in his actions and actually, he starts to see things very clear.

What is his thoughts when Nicola starts asking about his past?
Nicola has been trawling back through Phelan’s history so, in short, she is starting to present a different picture to Pat that he has of himself and when you are dealing with a narcissist that is always very difficult.

She seemed to be such a good influence on his life, why now does he suddenly snap?
He has just found her, she has had this really calming influence on him and she sees the prospect that he might lose her so again, that makes him very volatile. So that’s now in the mix as part of the pressure and you add on to that Daniel sniffing around, Eileen being oblique, Anna there in the background... the pressure is mounting.

Phelan makes a final decision about his hostages - is this the darkest side of Phelan we have ever seen?
To date but he can go darker, I am sure of that. If you cross a particular line, that’s it. So can he get darker? Yes certainly.

What has been the viewers reaction to this latest turn?
I think they really, really feel there is a good man in there struggling to come out and they were really rooting for him to turn the corner and then the Andy shock was like, ‘Oh no!’ The response was very interesting because at times we have seen the potential for him to turn, he does have redeeming qualities. It’s all good but it’s only one component of Coronation Street which, at the moment, is on fire.

How much fun is it playing a bad guy?
A gift. I have absolute gratitude to the writers, to the storyliners and to Kate Oates who give this guy all the room to maneuver, to really unfold as quite an extraordinary character. I am very proud to be up there with the very illustrious list of Corrie baddies because Pat Phelan is definitely one of them.