Steve and Tracy back together - Yay or Nay? 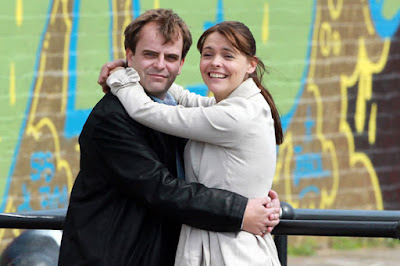 
There's a worrying story in the Metro this week suggesting that Tracy and Steve might get back together again.  Don't worry too much about the picture above - it's an old one, not a preview!

But Steve and Tracy together again? Please say it ain't so!  You can probably guess already that I'm going to vote a great big fat NAY on this one.  They're so wrong for each other, in every, er, conceivable way.  Yes, Steve is Amy's dad and that means there'll always be that connection between Steve and Tracy on the Street. But for the two of them to get back together again, oh, heavens, no!

But hang on a minute... could it just work? I wonder!

After Deirdre died in 2015 and Tracy's character mellowed after the passing of her mum, perhaps now actually might be the right time for her and Steve to get it back on.  Steve is lost without a woman, so lost that he still lives with his mum.  And as much as I'd love to see Steve and Leanne together and running the Rovers, perhaps a Steve fling with Tracy could be fun to watch (from behind the cushion on the sofa, of course).

All things considered, I still say Nay to any possibility of these two reconnecting romantically.

What do you say, Corrie fans?

I second your nay!

However there are days when I think they deserve each other.