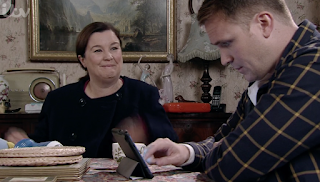 (This post was originally posted by Scott Willison on the Coronation Street Blog in October 2017, reposted to this blog with permission.)


Mary had a picture of Laurence Llewelyn-Bowen above her headboard.  Who knows what rag-rolled dreams he bestowed upon the young Mary from that privileged position?  Ms Taylor drifting off into a world of MDF, Handy Andy and ordinary suburban bedrooms transformed into a Turkish harem because the owners once had an all-inclusive in Bodrum.  Changing Rooms?  Changing LIVES, more like. 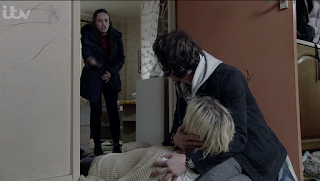 Faye and Seb have had, at most, five conversations in their entire relationship. You're teenagers.  You're having an intense, snog filled relationship.  You have literally nothing else going on in your lives.  How is it only now a surprise to Faye that Seb's home life is less than wholesome?  Teenagers will phone Childline if their parents don't get them a games console for Christmas; they are never happier than telling their schoolmates how terrible life at home is and how they're just so misunderstood.  I can therefore only assume that Faye and Seb have spent their whole time together snogging and having a little second base action without ever bothering to discuss their home lives. 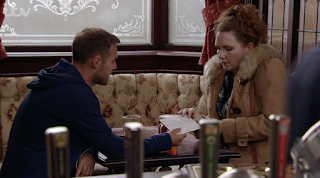 Poverty is a state of mind.  Fiz and Tyrone are in dire straits, to the extent that they'll exploit their daughter's cancer diagnosis for financial gain and then keep a cheque for two thousand pounds that a well-wisher sent through the post.  You can tell just how awful things are because they were only on their second visit to the pub that day.  Fiz later bought a round for her chums, then, in Friday's episode, treated herself to a hot chocolate full of marshmallows before buying a load of sandwiches she could've absolutely made at home, so you can really tell that she's in a terrible state of affairs that totally justifies fraudulently using your child's illness to extract money from strangers.  Also you don't need to share the money with your similarly financially bereft mates because after all it wasn't their daughter who went through painful and traumatising chemotherapy and therefore pricked the heart of a generous anonymous well wisher.  Perhaps next week Tyrone will explain how the money will buy Freshco Basics cornflakes for the girls' breakfast while on a first class flight to Hong Kong so he can buy some new overalls. 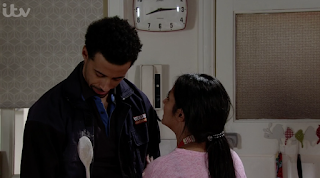 Alya skipped her Home Economics classes.  Speaking of overalls, Alya should really have done a bit more studying in her cookery classes at school.  They might have taught her that slapping a wooden spoon on a pair of filthy greasy overalls then plunging it into a chicken goujon mix leads to contamination, poor flavours, and 4 AM visits to the lavatory due to bacterial infections in the lower colon. 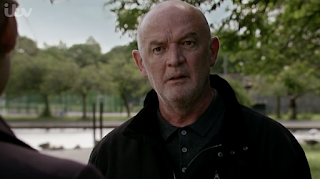 Conor McIntyre deserves all the awards.  Inside Soap, National Television Awards, BAFTAs, Pulitzers.  Can you get an Oscar for Best Psychopath You Kind Of Adore?  Conor has made Phelan the most charming lunatic on British television and he needs to be rewarded endlessly.

You can tell me Phelan's a horrible man who deserves everything he gets on Twitter at @merseytart.