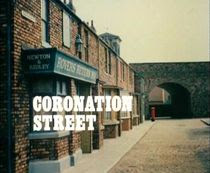 (This post was originally posted by GraemeN on the Coronation Street Blog in October 2017, reposted to this blog with permission.)

I was overjoyed when the announcement came that ITV3 would start re-running classic episodes of Coronation Street. To begin with, I was disappointed the network wasn't going to show episodes from earlier on - I believe the mid 1970s to early 80s to be the golden age for the show - however I can now see the benefits in starting in 1986. The episodes broadcast this week are modern enough to feature a vast number of characters viewers today will still be aware of, either because they are still regularly on our screens or because their time has only recently been and gone.

Coronation Street in 1986 featured regular characters who still appear today- Ken, Rita, Jenny, Audrey, Gail, Sally and Kevin. The likes of Deirdre, Emily, Jack and Vera, Betty and Hilda are still very much in our consciousness too. Early '86 also began some long running stories, introducing Sally Seddon to enliven Kevin's life for many years to come and most of all, the start of the three year Alan Bradley saga.


Before The Bistro came The Bellstaff
Even though 1986 Corrie may have lacked the so-called sophistication we have in 2017, they could still push the boat out and go posh when the need arose. And what greater need than celebrating the 21st birthday of Barlow twins Peter and Susan? Yay, more screen-time for my favourite fingernails down a blackboard character, Susan Barlow! Joined by a very blond young man claiming to be Peter (he looked more like evil Kirsty Soames' nasty daddy to me), Ken threw quite the thrash at The Bellstaff. As the manager pointed out, The Bellstaff is an upmarket residential hotel as could be seen by the very 80s shiny set Granada had produced for the episodes. The very forward-thinking Bellstaff even boasted a female DJ grinding out all the latest hits for the teenagers...and Mavis and Emily, skulking in a corner in their party frocks nibbling their nuts.

Of course Ken had a devious ulterior motive for splashing so much cash on the twins. Why would the cardigan wearing bouffant ever dream of doing something nice for his kids? Was he motivated by love and the thought that his late wife Val wasn't there to see her sprogs come of age? Was he 'eck-as-like. He did it to embarrass Susan and her sugar daddy Baldwin by inviting a load of dreadful young actors in to play Susan's imaginary friends from Newcastle and Glasgow. Those that had speaking parts (sadly all too few) had accents from everywhere else in the UK except Newcastle and Glasgow it seemed but Kenneth still rather smugly made his point. That was until Baldwin wiped the smile off his face by delivering Susan's birthday present, a bright, shiny and very tinny looking Austin Metro. How could Ken even begin to top that?


The Changing Face of the Snug


During a brief conversation with Hilda this week, Betty got all deep and meaningful. Now I love Betty, a street legend if ever there was one, but she spent most of her forty odd years behind the bar heaving her bosom, looking askance or threatening to walk out. However back in March 1986 she enjoyed a period of reflection, noting how popular the Snug was with the youth of the day. The likes of Sally, Kevin, Curly and Terry made a regular beeline for the comfort of the Snug and Betty wondered what the dear departed Albert and Ena would've made of it all, it having been their habitat for much of the past twenty years. Personally I imagine Ena would have been all fire and brimstone while Albert would have conned Kevin into buying him several pints of rum.

I had a moist moment when Betty reflected on the Snug, knowing as I do that within a matter of weeks from now in 1986, the old Snug would be no more, thanks to Jacko's dodgy electrics. For now though on ITV3 it's as hip and happening as the Graffiti Club. You almost expect to see Janet Street Porter hosting a yoof TV chat show in there on the subject of pre-marital doings.


This past week on Classic Corrie saw the first return of young Peter Barlow since he last appeared in 1978. Back then he was blond and as Scottish as they come. By 1986 he was still kind of blond but now surprisingly English (the Royal Navy will do that to you I suppose). Accompanying him was Jessica Midgeley, his girlfriend of the time who would later become his wife in 1990. Their divorce ten years later brought a now dark haired, very Northern Peter back to Weatherfield. Anyway, young Jessica only popped up for Peter's 21st birthday and then briefly once again two months later for Susan's wedding to one Michael Vernon Baldwin.

Anyway, to quote Victoria Wood's Martha Longhurst, our Jessica wasn't behind mangle when they were giving out stair rods. She worked in a bank after all. Super sleuth Jess very quickly surmised that Ken not only didn't approve of Susan marrying Mike, he actually hated him. Fast work from an outsider, I think you'll agree. She did well to work that out from Ken's 1986 expression, which crept between mild bloating and the guilt of sudden flatulence and back again. A shame we didn't see more of Jessica. Perhaps it's time she paid Peter a visit and gave Toyah B a run for her money. Mind you after all this time and all those head transplants, I'd be shocked if she recognised her ex-husband at all.


There was a beautiful, quiet little scene this past week which showcased not only that less is more but more importantly the absolute quality of Jean Alexander as Hilda Ogden. Even after 22 years as the famous Weatherfield char, Jean could still tug at the heartstrings like no other. This week in 1986 Mrs O was having words with her lodger Kevin Webster about his dubious new girlfriend, one Sally Seddon. Hilda didn't like the cut of Sally's jib (in hindsight she wasn't far wrong) and our Kev didn't take too kindly to Mrs Ogden's comments. Kevin stormed out and was found slumbering in the back of Mike Baldwin's Jag the next morning at Brian's garage. Although how Kev ever managed to get any sleep stuck in those tight 1980s jeans I'll never know.

Anyway, Kevin returned to a quiet, dark No. 13 Coronation Street to collect his belongings, only to find Hilda sitting in Stan's old chair, close to tears at the prospect of being left alone once again. Despite stiff upper lips from both parties, it wasn't long before the mood changed, Kev was sitting down to a plate of Mrs O's famous tater hash and all was forgiven. It was simply done, very real and brought a tear to my eye. It also highlighted what a nice, genuine lad Kevin once was which makes it such a shame that the writers have since turned him into such a hot-headed, morally questionable so and so.


The Wonder of Bet's Weave


And finally, Bet's wondrous wiglet deserved its own on screen credit this week. In early '86 Miss Lynch was still sporting a rather modest, almost natural looking behive do. I liked this do of choice as it left the way clear for our Bet to react drily and ever so slightly camply to all the comings and goings around her. However the end of one recent episode saw Bet and Gloria glammed up and off out on the toot to the aforementioned birthday bash at the Bellstaff. What a vision. Bet emerged with golden locks tumbling from ever orifice. How was that even possible, viewers asked themselves? I did a quick calculation and there's no way on earth that what was previously a-top Bet's bonce could now be so resplendent around her shoulders. Even more surprising was that none of the regulars, not even our Betty, batted an eyelid.

In a brief scene later on, Audrey hoped Bet would be her first customer when she opened her new front parlour salon. All I can say is, good luck Aud, you're going to need it... 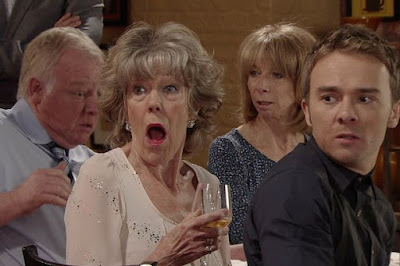 Classic Coronation Street is broadcast on ITV3 every week day at 14.40 and 15.15, repeated from 6am the next day.