When Weatherfield gets weird 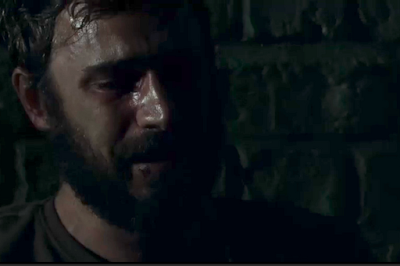 (This post was originally posted by Clinkers (David) on the Coronation Street Blog in October 2017.)


Nothing will ever, totally diminish my love of all things Corrie. Like any fine relationship though, it has its ups and downs. I staggered through the woefully dull mid-80s storylines when the height of excitement was Alf Roberts plonking his backside on Sam Tindall's Christmas pud. I endured the tedium of late 1990s Zoe Tattersall, her 'bay-beh' and the dull cult. I even ploughed manfully through Graeme Proctor and his marriage of convenience to a woman so bland that I don't even recall her name.

This week though brought about one of those moments when I would have gladly sewn my eyelids together with fish wire. Or happily have spooned out my brain with a soup ladle in order not to remember Friday night.

It's the culmination of several weeks of cobbles-based weirdness which has left-me somewhat slack-jawed and dead-eyed. Six episodes per week may be a bonus for some but to find yourself squinting at catch-up at 5.30 a.m. drains the series of much of its joy. Plus there is the ever-changing cast. It ebbs and flows like the parting of the Red Sea. Characters enter and then exit stage left at such a pace that they may as well be on roller skates. When  they do stick around, at times they seem unrecognisable. 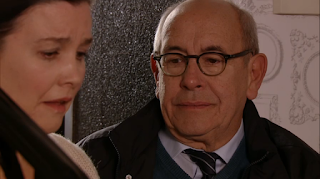 Mary, bless her, seems to be galloping through personality changes like a decades worth of Doctor Whos. Mad Mary became Caring Mary and has recently morphed into Kidnap Mary and Hellish Mother-in-Law Mary. It's off-putting and a tad bizarre. Of course, she's now coupled with Norris who we could at least rely on to be sour and camp. Nowadays he sits in the Rovers mumbling and looking forlorn. Maybe he's trying to work out what Vic Reeves' character is supposed to be, much like the rest of us.

Then we we were served up that oddity of a storyline where, apropos of nothing whatsoever, Liz decided to be nasty to Peter and Toyah. They gave her a job for crying out loud but being Liz there's no gratitude whatsoever, only some stagnant non-event of a story involving beer and a gay director from the brewery. Ho-hum.

There are inconsistencies all over the place. Bravo to Rita for surviving major brain surgery with her wig intact. Brace yourselves for a long goodbye which, given the current propensity for odd storylines, will end with her singing So long, farewell at her own funeral. 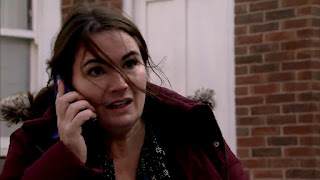 The whole Anna Windass farce is playing out nicely. In a decade she travelled the distance from dollop-in-a-track suit to Mother Earth to shrieking sandwich filler to smug wannabe social worker. Enough already. The woman is being trashed in a similar manner to the hapless Sunita a few years ago. Thankfully though, Anna's not heaving her baps into every scene. Well, only the ones she's slicing and buttering for Roy, a character who seems to now exist on the periphery of Street life.

Still, we should take some pleasure in the renewed chumminess of Steve and Dev. Steve's currently working his 'perennial loser' persona, aided and abetted by Comedy Dev. Yep, we're into another round of bog-eyed bellowing from all concerned. Give it a couple of weeks and the pair of them will be hurtling down the cobbles in clown suits on a comedy car. Add to this the lovely Moira. To some of us though she is and will always be Helen from The Archers. I keep expecting her to start banging on about milk yields, fermented foods or that silly old time when she tried to stab her husband to death. Instead she trundles in and out of the medical centre office like an out-of-control flymo.

Then there's the faktry  - or lack of it. Still no explanation as to how someone could nick a roof in broad daylight. Never mind eh? Instead we can revel in the machinations of the fashion industry, as played out by Alya from the comfort of her own living room. Sadly, she's about as interesting as a piece of old flannel hanging off a bush. Her moral compass is pretty much knackered as one minute she's 'with the girls' and the next, it's 'up yours ladies'. There has often been a feeling that the storyliners  don't know what to do with Alya and currently, it shows.

To Pat Phelan then and a tour de force of a performance from Connor McIntyre. He's undoubtedly Corrie's most watchable baddie and in a different league to pantomime killer Tony Gordon or the slightly camp drugs lord, Jez Quigley. Nope, Pat is up there looking down on the lot of them. As joyous as his portrayal is though (murder one minute, prayers the next), the second episode of October 27th will, for me, go down as one of the most uncomfortable and unnerving half hours of soap ever. Superb though the acting was (Oliver Farnworth - take a bow), the entire programme felt wrong. As a stand alone, late night drama it would have been perfect or maybe as some Corrie spin-off. However, as part of regular Corrie it felt wrong. The story has taken the show to a different place. It inhabits a world of wonky camera work, uneasy relationships, fear, hatred and cruelty. Had this taken place during Corrie's golden era then no doubt we would have enjoyed Annie Walker keeping Fred Gee hostage in the Rovers cellar, Maggie Clegg cleaving off Jerry Booth's hands in the Corner Shop meat slicer and a heroin-addled Bet Lynch suffocating on her own beehive. 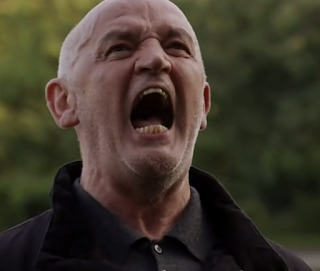 Corrie has always been a bastion of light and shade when it comes to storytelling. While no one wants to be fed a diet of overweight grocers flattening plum puddings, neither does this particular viewer want to spend half an hour in a pit of despair. That's EastEnders' job.