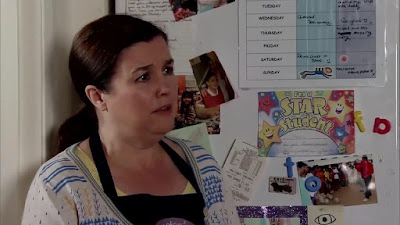 
What is Mary’s motive behind throwing the dinner party with Dev, Jude, Angie, Peter and Toyah?

With the very best of intentions, Mary’s motive is to make Angie aware that she has a problem around alcohol and in Mary’s world, the best way to do that is to have somebody who has openly said he has alcoholic problems share his experience of heavy drinking, which is Peter. But of course, with Mary’s usual missing the mark, it’s all a bit heavy handed and Angie is no more the wiser of why she is there.

Why has Mary convinced herself Angie is an alcoholic - doe she have any evidence?

Mary has found a leaflet that accidentally fell out of Angie’s bag which has advice on heavy drinking and being an alcoholic so she has put two and two together and ended up with seven, thinking this explains Angie’s strange behaviour. Angie can be distant and she can be removed; she seems distracted all the time. So Mary is constantly trying to work out why this is and that's when she comes with the idea that Angie has a drinking problem. Mary pursues this so everytime Angie has a drink, Mary jumps to the conclusion and thinks it's one of many when it is hardly any at all.

How would describe Mary and Angie’s relationship at the moment?

Its very, very tentative, they are very much on their guard with each other. And of course, there’s jealousy and there’s fighting for the attention of Jude and George. They don’t know each other truly yet.

Jude asks Mary to babysit George but he becomes unwell in Mary’s care - what are Mary’s first thoughts?

Mary’s first thoughts are to find out what’s wrong with the little fellow, she is concerned that they get to the root of his illness. She asks Dev’s advice on what to do and Dev tells her to get Angie. So Mary goes to the bistro and tells Angie exactly what’s happening. Mary knows it’s not a casual thing, he is very, very unwell.

What is Mary’s reaction when Angie says she will drive him to A&E?

Mary is horrified, why would she allow Angie to drive when she has been drinking? Mary thinks Angie is in denial. She absolutely panics and thinks her grandson is in danger because there is a drunk driver setting off… not only drunk but in a high state of anxiety. Mary is very worried and that’s what leads her to call the police. She honestly believes she is doing the right thing.

So when Mary calls the police it comes from a good place?

What has it like being filming with Mary’s extended  family?

It’s wonderful having Mary’s extended family. Romeo who plays George is absolutely gorgeous, we have all fallen in love with him.  Having Paddy who plays Jude back is wonderful and the addition, having Victoria is wonderful so it’s really exciting to have this ready-made family. The interesting thing is, it’s not all happy-endings, it’s a very bumpy ride, people getting to know themselves. That happy ever after often is a fairy-tale, there is a lot more skeletons in the cupboard to be revealed...