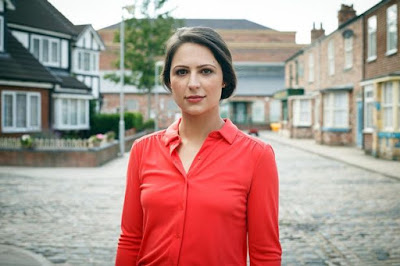 
What’s Nicola’s first reaction when Gary confronts her about her being pregnant?

Nicola completely denies it at first and tells him the dates don’t work and that it must have been her ex boyfriend, Scott’s baby. She is so worried because it was a one-night stand and she recognises what Gary and Sarah have is something really special. She doesn’t want to get in the way or cause harm to their relationship so she throws him off the scent.

Does Nicola have a soft spot for Gary or was it just one night?

Yes, Nicola does have feelings for him but Gary made his really clear. Probably the reason why she doesn’t tell Gary that it is his in the first place is because she cares about him. He opened up to her about his PTSD and his job in Ukraine; she is really attracted to bad lads but she sees him finally getting his life together and she doesn’t want to ruin that for him. Secretly, or maybe it is quite obvious to the audience, she has feelings for him because he is such a strong, caring and protective person and she has not had that in her life recently.

How does the first conversation go between Nicola and Gary?

Gary says that he is relieved, understandably. There is a little bit of sadness from Nicola that he reacted like that because the way that he comes to find her, he finds her address and seeks her out, she finds it quite romantic. She thinks he might have come over to see her again romantically. But when he says he is relieved, Nicola has to put on a brave face. She thinks she has done the right thing at first because she wants to do the best thing for Gary.

Nicola and Gary then have a heated exchange in the street where Nicola tells Gary the truth that he is the father. Why does Nicola change her mind?

Nicola starts to feel guilty about the fact that she has not told Gary the truth because she believes that a child has a right to know it’s father and she is wrestling with the guilt of that, particularly due to her own story of paternity. Her entire life she was lied to about who her real father was - for better or for worse! She knows she doesn’t really want to do that to her child and she doesn’t know how to deal with that.

She tells Gary but is she worried about the rest of the street finding out?

Nicola really doesn’t want Sarah to find out, she wants to be quite respectful despite going to bed with her boyfriend! The other people she is worried about is Gail, Audrey, Bethany - any of the Platts! She is quite scared of them. And also, she wouldn’t want Anna to know she was pregnant but she feels guilty carrying her grandchild without her knowing.

The Platts are quite a family to take on, aren’t they?

They really are, they are quite a strong unit. We will have to see because often people like that can be united by common enemies and particularly with nobody really liking Phelan and Nicola being new to the street. Nicola wants people to like her and she doesn’t really understand why everyone doesn’t like her because of her association with Phelan but she is starting to figure it out bit by bit.

Speaking of common enemies, Nicola is spinning a tangled web with Gary being a Windass and Anna’s son?

Could we start to see a different side to Nicola?

Nicola had every intention of coming to Weatherfield and being quiet and getting on with her own life but now everything is starting to unravel. This safe social worker who is quite nice and doesn’t want to get involved in drama - the moment that Gary kisses her is the moment that changes everything for her.

Has it been good to play such dramatic storylines so early on in the role?

Nicola is so much fun to play and to be stuck in at the deep end. Everyone has made me feel so welcome on the street and so safe to try stuff out. I feel like I am given full rein to play Nicola fully and I’ve had some really big emotional scenes with lots of crying. This pregnancy storyline has been really fun to play with incredible actors. I love Connor to pieces because he is the one that brought me in and now I am getting to work with Debbie Rush and Mikey North.

What’s the best thing about working with Mikey North and Debbie Rush?

Nicola is a total air head .(No offence Miss Thorpe).