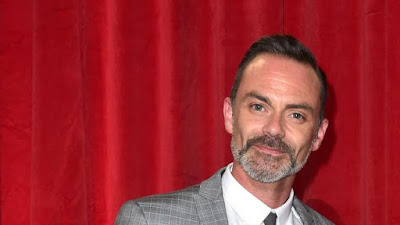 
What are Billy’s first thoughts when he is arrested for robbery?

Billy is horrified, he was in a few weeks before when he handed himself in for the Peter thing but what he doesn't realise is that the fingerprints he gave when he was arrested then have brought up a cold case from 2001. So when he is arrested he has no idea why and he thinks it's a mistake.

What happens at the police station when the police ask Billy questions?

Todd has sent Adam in. Adam takes Billy aside and tells him to say nothing so, although this goes against Billy’s moral stance, he keeps his mouth shut.

What happens after when Billy is alone with Todd?

Billy sits Todd down and speaks about something that he has never spoken about to anyone before.

Is Billy worried that social services will find out about his arrest?

Yes of course, Billy and Todd are trying for adoption and the poor kid has been through enough with the death of Drew so he knows that this potentially could damage their future.

How much involvement have you had with the character of Billy and Billy’s past?

Initially it was conversations with the writers and it came from me saying, “If you ever write a scene for me with my top off, you are going to have to explain why the vicar has tattoos,” which they thought was interesting. So when eventually that happened, which was a couple of years ago, there was a line about a past life. It was clear that there was a life before Billy became a vicar. But it wasn’t really until Kate Oates arrived and she asked me and I said that from my perspective it would be interesting to know why he became a vicar. I’ve known people in my life who have become born-again Christians to remove themselves from unpleasant and dark situations so I thought that it was a very interesting thing to give a vicar a colourful past.

What do think the viewers reactions will be to Billy’s confession?

I am excited but slightly nervous because it does show a completely different side to him. This storyline explains who Billy is now so it is not fundamentally changing who Billy is now, it just means we have more of an idea who Billy was before he became the person he is now. It’s still Billy but just with a hell of a lot more information about him.

Have you enjoyed playing a darker storyline?

From an actor’s perspective it's great because I am learning more and more about who Billy was prior to him joining Coronation Street. It’s been great to make Billy more three dimensional, to flesh him out, to give him a history. It's a weird job in a sense that with a drama or a play or a movie you know the character’s entire arc; you’ve got a beginning, a middle and an end. In something like Corrie, you are constantly playing middle so to suddenly discover his past and work out who Billy is and where he is from has been a joy.