It's speculation time again, guys and gals. Watching Corrie this week had me turning my mind to a couple of plot points upon which I have had an educated guess about where they're going. 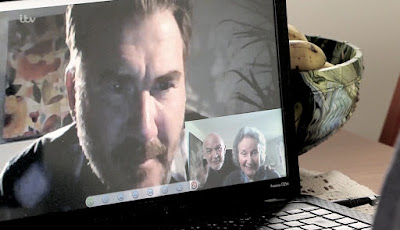 First, it seems very clear Pat Phelan is going to put someone else in the cellar and let Andy go free to be their minder. Forget for a minute how he's going to be able to explain Andy's sudden reappearance because Andy won't likely stay away from the street. The big question is who will it be if he manages to pull it off?

All week, Phelan has been getting more and more worked up over Daniel's investigation and interference into his business and I bet most of you figured Daniel is going to be the next hostage. I don't think so for two reasons. One is that Daniel is known to be investigating Pat and if he goes missing, there will be questions. Daniel also has lots of family that will be asking even more questions to find him. The second reason is that I doubt very much Phelan would need a gun to keep Daniel under control to get him into the basement.

But Vinny/Harvey is another matter. That gun is for him, I feel sure. He's a much more dangerous person than Daniel and if he's going to be taking down someone like that, it makes sense that he'd get something to back him up. 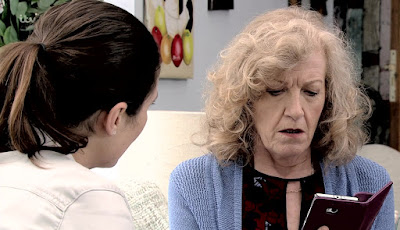 The other storyline that piqued my interest was Nicola's visit to her mother's old friend and neighbour who went whiter than a white thing when she saw the photo of Pat Phelan and heard that he was Nicola's father. She didn't think her friend would  have had an affair. Maybe she didn't. We've only got Phelan's word for it. Was he in love with her? Yes, I think so, but she rejected him in the end for her family, telling Phelan she was pregnant with her husband's child.Nine months after she broke up with Phelan, Nicola was born.

Lydia would have known Phelan since she was close to Nicola's parents and he'd have known her. I wonder if they had a one night stand either before or after Phelan lost the love of his life and that's where Nicola came from. Maybe she's Lydia's daughter, given to her friends to raise. I realize I'm reaching a bit here but why would Lydia look so shocked to see Pat's photo and be so sure her friend wouldn't have cheated on her husband? Because she was the one cheating on her husband with Phelan. Her friends might have covered for her and it's possible that they didn't know who the father really was.

Ok, maybe that theory is stretched a bit thin the more I think about it. What else could that be? Thoughts? Theories? Go for it.

"Maybe she's Lydia's daughter, given to her friends to raise"

I think it is something much darker. Maybe Phelan assaulted Nicola's mother and she became pregnant.

Heh heh i did say it was a long shot! It's so much fun to speculate!