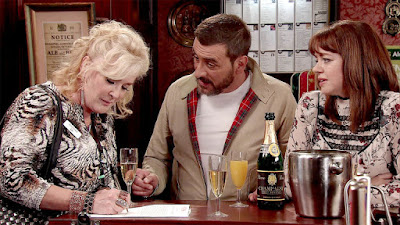 
This week we saw Liz McDonald sign over the Rovers Return to recovering alcoholic Peter Barlow and his girlfriend Toyah Battersby.

And in this week's Inside Soap magazine, Beverley Callard, who plays Liz in Corrie, says that she's looking forward to Liz's future away from the pub.

Beverley told Inside Soap: "Instead of turning left in the studio, now I just turn right. It's great for me as an actress, as Steve and Liz end up living together in the flat above Streetcars.

"We're getting some proper McDonald scenes and they're so funny! I can't tell you much, apart from Steve is with a woman and Liz doesn't see any chemistry. She tells him: 'Steve, she's a nice girl, but if she doesn't put a snap in your celery, she isn't worth having'.

"And then Liz goes: 'I've seen more romantic kisses at Liza Minnelli's last wedding!' They do write some classics for Liz!"

But... Peter taking over the Rovers Return? I can only imagine what Blanche would have had to say to that!