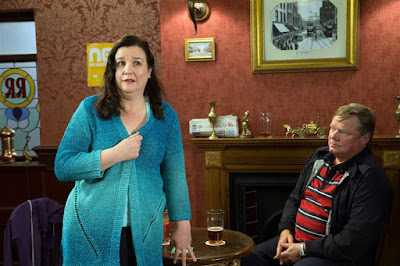 Since the early days, in 2008, when several critics and fans described Mary Taylor as ‘weird’ or ‘odd’ or ‘strange and creepy’ and even in some cases ‘a downright nut-job,’ Mary’s star has been rising.

Thanks to the skill and imagination of the writing team at Corrie, Patti Clare’s acting genius and no doubt the influence of Kate Oates, Mary Taylor’s character has broadened out and become someone who, though a little eccentric and slightly out of time, has a heart of gold and a generally optimistic outlook on life.

Since the storyline about her now adult son and how she became pregnant at 14, and was forced to give up her baby son, a weight has lifted from Mary and her natural kindness has been given full reign.

In addition, she can get on with almost anyone, even Tracy. It seems that there is a sound working relationship between these 2 most unlikely work mates.  Who would have thought that that could work? As well as the florist’s, Mary pops up working at the café, the Kabin and also still looks after Dev’s children. Another string to her bow now is as a babysitter for Sarah’s baby Harry.

It was there that came Mary’s finest moment. Noticing the packed bags and Bethany’s desperate rummaging through the drawer to find something, it clicked in Mary’s head exactly what was happening. Telling her own story of how she became pregnant at 14, how she believed in the possibility of romance and that the man cared for her; she spoke of how, in the harsh light of day, she realised what it really was – rape. She spoke of how Nathan had allowed 3 men to rape Bethany. Mary was bravely direct and showed genuine concern for Bethany.

As Bethany snatched up her bags and darted out of the house, Mary was not giving up. Mary tells an impatient Nathan, ‘She doesn’t want to go.’ She stood up to Nathan telling him how she knew all about men like him and how he ws a bully. One of the most sinister things Nathan has ever done is to touch Harry’s face in a shockingly untender way. He’s right – Mary does not know what he is capable of. His words, ‘She’s mine and I’ll do what I want with her,’ revealed the true lack of any feeling whatsoever for Bethany.

Sadly, Mary’s protestations didn’t work, at least not at that very moment, but something of what Mary said must have hit home. In the car Bethany said to Nathan that all that mattered was that they were together. No response from Nathan. Then, his angry reaction to her not having a passport exposed his true nature too. Seeing Nathan shouting and gesticulating as she came out of the toilets, it seemed that the rose-tinted spectacles Bethany has been continually wearing, smashed - and Nathan was exposed for who he really was.