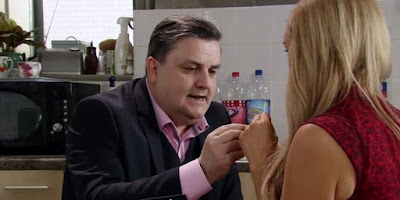 In an interview with the Irish Independent, Simon said  has said he will do anything to make his role on Coronation Street permanent - except become Gail Rodwell's on-screen lover. Well, you can hardly blame him for the latter if he wants to stay alive.

Simon says that he hopes to return to the show before Christmas.

"It could be re-occurring," he said. "They take a look at how you got on and then decide if they will bring you back to take over the pub or buy the corner shop or sleep with Gail or be a chef."

Asked if he would like to be the latest love interest for Gail Rodwell - nee Potter, previously Tilsley, Tilsley again, Platt, Hillman and McIntyre - he added: "I draw the line at some things. A chef I'll play, but Gail Tilsley's lover? Nah."

Simon said the response to his appearance on the show was "staggering".

"It was unbelievable," he said. "When people woke up on Saturday morning they must have thought I died because of the coverage it got on Twitter. "I've done shows like The Good Wife and movies with Vince Vaughn, but seven minutes on Coronation Street was the most reaction I've ever got."

I'd love to see him back. What do you think?