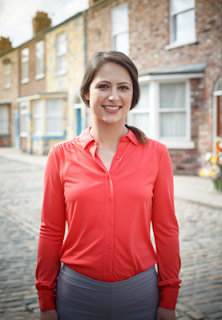 I have just had an idea. It's not really a spoiler because soaps are all about pairing up couples. There has been some publicity that says Kate Connor is going to find love and it's reportedly someone that's already on the show. There has been speculation that it's going to be Rana Nazir who has a big storyline coming up. It might be her, I wouldn't rule it out, and it might be Alya as other people have guessed.

So as long as we're playing the guessing game, here's another suggestion for your perusal, good readers. May I suggest that it might be Nicola Rubinstein, Phelan's newly discovered daughter? It's true, we don't know anything about her yet aside from her paternity and that she's a case worker for troubled youth. She's in the right age bracket, with a birthday in May, 1990 making her 27. Kate's the same age, turning 28 on October 5 according to Corriepedia. (which is a tad older than I thought she was).

We haven't heard Nicola mention a husband, children or other partner of either sex yet and maybe we will in the coming weeks but until I'm definitely proven wrong, I'm throwing Nicola's hat in the ring. So far, I like this character quite a lot. She stands up for herself, she seems to take no guff off Phelan (or Seb), she's smart and seems to be good at her job and she obviously cares for the young kids in trouble that she tries to help. I would quite like it if she and Kate got together and we saw more of her on our screens.