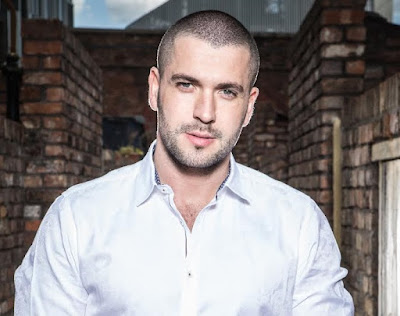 (This post was originally posted by Jordan Lloyd Beck on the Coronation Street Blog in June 2017, reposted to this blog with permission.)

“He shouldn’t have done this, because she’s not going to stop at anything. God help Aidan!”

Hiya! It’s just Jordan with another one of my interviews from the recent press day. This time, it’s with X Factor winner turned actor Shayne Ward, completing the current love triangle as Aidan Connor.

As we know, Eva is set to discover that she is pregnant, just after discovering that Aidan is having an affair with Maria. What makes this love triangle interesting is the way the revenge plot is set to pan out. Eva doesn’t confront him with all guns blazing. She buys a brand new massive pink Range Rover on his credit card. Fabulous! That’s the way to do it. And on a more serious note, she also knows all about the affair when she announces her pregnancy to naughty Aidan.
“Being a dad has never crossed his mind”
Shayne spoke of how Aidan being a dad has never even thought about being a dad. His life has been focused on impressing his own dad, owning a business and is more career – or Maria – driven than anything else. This is the polar opposite to Shaye himself, as he spoke at length about how much he loves being a dad to his own little girl.
“To actually be a parent and work – it’s crazy! I like the juggling of it. It can help”
“Some people say I was born to sing, but I think I was born to be a dad”

Shayne revealed that once the truth is out, the revenge storyline is set to run throughout the summer, and if you’ve seen the trailer ITV released today teasing Eva’s revenge, you’ll know that this summer is not going to be fun for Aidan. According to Shayne, the worst thing Eva could do to hurt him is to take the career he has worked so hard to build and drain it. And it looks like Eva is set to do exactly that. She wants him to hurt, and from the way Shayne was talking, Aidan is certainly going to hurt.
“Eva is very materialistic. She wants the marriage, she wants the child. Whereas, Maria has had her child, she has her job and she’s quite chilled”
Interestingly, Shayne spoke about his career switch from singer to actor. He knows that casting established singers in acting roles is often controversial, but he hopes to – like Kym Marsh – prove people wrong and show that it can work. He is loving his time on the cobbles and is happy to stay in Weatherfield for as long as producers want him.
“It’s been brilliant, and time has gone so quick. It’s mental. But I still do my singing. I did a gig in April and I still have a fanbase on the music side. But I’m really enjoying the acting side. To a lot of people, I’m no longer Shayne, I’m now Aidan”
But life outside the ITV Studios hasn’t been plain sailing for poor Shayne, as he revealed he gets a lot of heckles from the public following his naughtiness on the cobbles. He humorously told of a bolshy ten-year-old who spotted him in the fruit aisle in a supermarket and yelled at him to “stop sh*gging Maria!”

Shayne said the divide between himself and Aidan is important to him as a singer transitioning to an actor. If people are recognising him as Aidan, that makes the character more believable.
“I absolutely love it. I learn every single day. I get things wrong, but I’m not afraid to ask questions. It’s a lot of fun”