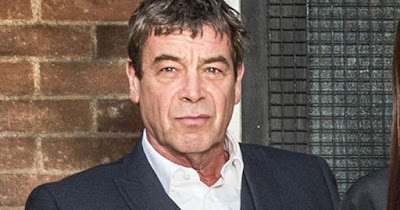 
Richard Hawley, who plays Coronation Street's Johnny Connor, was the guest on the Matthew Rolland radio show this week. Matthew's radio show is broadcast on Hospital Radio Reading and he gets some excellent guests.

Richard chats to Matthew about his role as Johnny in Coronation Street. He explains how he first got into acting after seeing a play at the Everyman Theatre in Liverpool when he was in his early 20s and spent some time in the bar with the actors after the show.  This inspired him to join a drama course and he became completely absorbed with the world of acting.

Richard also talks about acting in top TV shows such as Bergerac and Prime Suspect where he worked with Helen Mirren.

Speaking about  Coronation Street, Richard said that he's been up for many different roles over the years and he says he felt destined for it in some way.  At the time when he got the call to say he was being offered the role of Johnny Connor he was fixing a tractor!

He says it's an absolute dream to be working on Corrie and the enthusiasm is obvious in his voice. He talks about his on-screen family and working with Shayne Ward (Aidan Connor), Faye Brookes (Kate Connor), Alison King (Carla Connor) and Sally-Anne Matthews (Jenny Bradley) too.

Speaking about the rumours of Alison King returning to Corrie as Carla Connor, Richard says he'd love to see her back if the rumours are true.  And he says that he particularly loves doing scenes with Barbara Knox, who plays Rita. He described her as "...old-school, disciplined and on it!".

And the future for Johnny Connor on the show? He's going to receive a shock diagnosis but he says he doesn't yet know if his wedding to Jenny will happen. Oh, I hope it does!