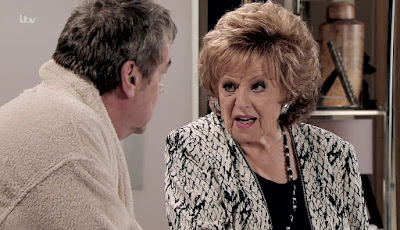 Mama Lion award: Don't mess with the ones Rita loves! Awesome scene. We don't get to see Barbara Knox in meaty scenes like this much anymore.

Open Mouth, Change Feet: Denise expounding on how great traveling was and wanting to do it again. When the abandoned Daniel was standing right behind her.

Bad Judgement Call: Johnny knows about Aidan's affair with Maria. It must have been the booze making him encourage Eva to propose!

Throwback award: Lovely little rememberences of Alf. Audrey said they only ever bickered, never had a "humdinger". I remember a few, don't you, dear viewer? Time smoothes off the edges, I suppose.

Dirty Dog award: Aidan knew Eva was waiting for him at the Bistro for dinner but he ignored the time and stayed in the Rovers flirting with Maria. Solution? Take the party to the Rovers instead. Then after saying Yes to Eva's proposal, he nips back to Maria's and insists nothing's changed between them. He also gets the I Want It All award.

Musical Ambiance: "We've Got Tonight" by Bob Seger when Aidan and Maria talk in the pub. "We're on the Road to Nowhere" when Daniel approached Sinead in the pub.

Down off the high horse award: Jenny thought Eva's proposal was common until Kate reminded her she was proposed to in the factory.

Out of character award: Surely Ken would have brought a few "green for life" bags to Freshcos for his shopping?

Lines of the Week:
Zeedan "You're a nurse and I'm a chef. I doubt it's a case of high blood pressure or over seasoning"
David "That's just the way the mop flops"
David "Seven years' bad luck. Doubt I'll even notice"
Nicola "You look like a man who believes in redemption" (If only you knew!) Phelan "We're all screwed without it" (that's you screwed, then!)
David to Gail "If you had a brain cell, it'd be lonely"
Phelan "You think me being a serial killer might be a problem? I am joking!" (not by much)
Kate to Jenny "You sound funny when you talk through gritted teeth"
Aidan "I'm not having his wedding being camp!" Sean "Have you seen who you're marrying?"
Maria about Aidan "He only said yes because" David "He couldn't say no" Maria "Yeah" David "So he's weak" (got it!)
Jenny to Eva "Be very careful marrying a Connor. All they do is lie" (even more than you realize)
Liz "Steve. When you're in a hole, stop digging"