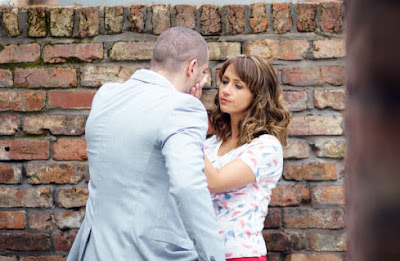 
In next week's Coronation Street, we'll see Aidan and Maria sneak a snog up the ginnel. And unbeknown to the Corrie couple, they're being spied on. Not only does someone see them and spot what they're up to, but they also take a little film of the kiss on their phone.  You can find out more on that here.

In this weeks' fab Inside Soap magazine, Shayne Ward , who plays Aidan Connor, gives a little interview about kissing his Corrie co-stars. Well, it seems as if he's either at it with Maria or Eva.

He tells the magazine: "It's been an absolute breeze - it hasn't been odd in the slightest! Because I've known Catherine (Tyldesley, who plays Eva) and Samia (Longchambon, who plays Maria), for some time, and I also know their husbands, there's no awkwardness.