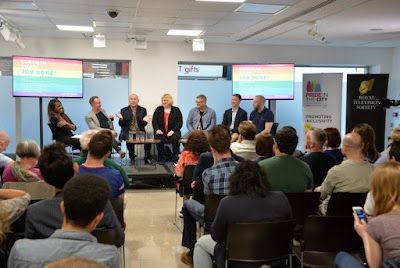 "On the date 12th July, I was lucky enough to be able to attend the RTS talk, ‘LGBTQ In Soap: Job Done?’ As a member of the LGBTQ+ community myself, I was intrigued by what would be discussed. As with Corrie itself I've always been impressed on how they include members of the community and don't kill them off for the point of it like most TV shows have been partial to. Daniel Brocklebank (Billy ‘the vicar’ Mayhew) and Annie Wallace (from Hollyoaks), who worked on Hayley Cropper’s storyline, were in attendance.

When the Hayley storyline was written in the 90s, it was a time where trans rights and representation were not that great so the fact that Corrie spent the time trying to give the storyline the justice it deserved is pretty admirable. One point that Annie brought up that I had never realised was that Corrie had its first trans character before its first gay as Hayley entered in 1998, 5 years before Todd Grimshaw’s coming out storyline began.

Daniel Brockleank, who plays Billy the vicar, discussed how important the representation of LGBT is as when he was growing up there was hardly any on television - and I have to agree. There was still very little representation in the shows my parents watched or the cartoons I saw growing up so it's great how shows like Corrie, which are in our living rooms every night as stated at the event, are showing real representation. When questioned about if his being out as an actor causes him to the type cast he said that it didn't bother him so much as now he just wants to add to the representation shown on TV. 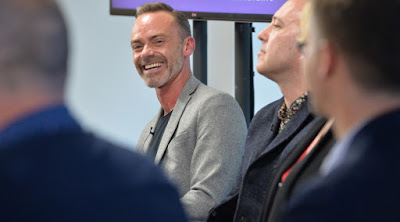 At the talk, the scene of Todd and Billy at the hotel room, shown last year, lead to a jokey discussion on Todd’s “rush of blood from the head” and the homophobic outpour that scene resulted in. Daniel kept the dazzling smile on his face as he explained some of the vile comments he received based on children seeing this.

He then said when parents of his own family saw this they didn't even notice anything amiss. The most shocking revelation to me was that the hotel scene was originally meant to be topless but on the day they decided to not go with that approach. Daniel commented on how the homophobes would have loved it even more if that had gone ahead. 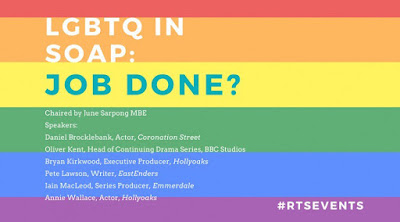 On the topic of homophobia he was asked what kind he normally receives as Billy but said most of it is wasn't to do with the fact that Billy was gay, but that he was a gay clergy as they believe clergys shouldn't go around kissing other men.

What amazed me most about the talk was the way Daniel tackled the homophobia he faced on a daily basis from being an out actor. He detailed stories of being in Sainsbury's and being told he was going to “burn in hell” but made some joke towards them.

Overall the talk was an enjoyable insight on what tv producers and actors thought into the LGBT representation in soaps.

With many thanks to Laura for this!

Email ThisBlogThis!Share to TwitterShare to FacebookShare to Pinterest
Labels: events