Who lives where in Coronation Street (1/2) 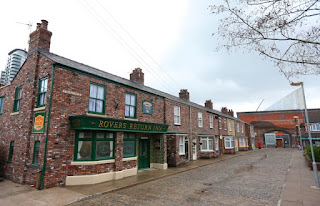 (This post was originally posted by Michael Adams on the Coronation Street Blog in June 2017, reposted to this blog with permission.)

This week, our blog editor Glenda posted about the 5 Weatherfield locations that we no longer see, and asked if anybody would do a post about who lives where in the show currently, following a rapid change in residents living arrangements in recent weeks. I've took it upon myself so here goes - let me know if I have anything wrong!

Rovers Return Inn
Well Kate Oates has teased that there will be a new name above the door at the Rovers this Summer but currently it's just Steve and Liz McDonald who live here. We know there are two bedrooms upstairs at the pub, but it makes me wonder where Amy sleeps when she stays over. Perhaps she has a bed in one of the rooms, or sleeps in that random living room that appeared upstairs in the late 2000s.

No. 1 Coronation Street
Ken Barlow, the house's inhabitant for best part of the show's on-screen history (1972-74, 1976-90, 1995 onwards). He lives here with his adopted daughter Tracey, and her daughter Amy. We recently saw the living room at No. 1, which is Amy's bedroom.

No. 2a Coronation Street
Maria Connor and her son, Liam Jnr. live here above Audrey's Salon. Michelle Connor was living here but moved out recently after a falling out. Aidan Connor has also spent one too many nights here recently, though not to fiancée Eva's knowledge.

No. 3 Coronation Street
As Emily is in Peru, Norris Cole is renting her bedroom out to lodger Sean Tully for company. Oh how I wish we could see more scenes from inside No. 3! Just think of the hilarity...

No. 4 Coronation Street
The one with the moving staircase, No. 4 has been home to Cllr. Sally Metcalfe since she swapped houses with the Peacock's back in 2008. She lives here with her husband Tim, and daughters Rosie and Sophie from her previous marriage to Kevin Webster. Her sister Gina Seddon moved into the house recently, meaning Rosie and Sophie have had to go back to sharing a bedroom!

No. 5 Coronation Street
Tenant Chesney Brown is currently sleeping on the sofa after the return of wayward ex-girlfriend Sinead Tinker earlier this month. Her auntie Beth and Beth's husband Kirk Sutherland also live here, alongside Beth's son Craig. I really do wonder where they all sleep in this house, does Craig share a bedroom with his mum and stepdad? It's also worth noting that No. 5 has a fantastic brick fireplace that we never see anymore. 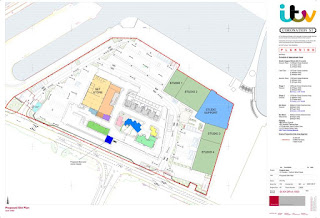 No. 6 Coronation Street
It was our blogger Graeme who noticed in 2014 that the house was cursed, and that was probably something to do with the wallpaper that had been up donkeys years. Luckily, the Nazir family tastefully revamped the house and built an orangery on the back of it last year, but the house still remains cursed. Relative newly-weds Zeedan and Rana Nazir live here with house owner, Zeedan's grandmother Yasmeen and kebab shop worker Cathy Matthews. Does any reader know where Cathy's nephew Alex Warner lives? I was sure that he'd also moved to No. 6 but his absence on the street recently suggests not.

No. 7 Coronation Street
The front of No. 7 collapsed due to a dodgy beam all the way back in 1965, but was rebuilt in 1982 after many years of being rendered through the middle and replaced by a bench. The back half of this residence still dates back to when the street was built in 1902. Shop owner Dev Alahan lives here with his twins Aadi and Asha, and his girlfriend Erica Holroyd. The children's in house nanny Mary Taylor sleeps in the converted loft space.

No. 8 Coronation Street
Home to the Platt family since it was built, and currently owned by David Platt, No. 8 is also home to David's mother Gail, children Max and Lily, sister Sarah-Louise and her children Bethany and Harry. The garage of No. 8 was recently converted into another bedroom with en suite.

No. 9 Coronation Street
Tyrone Dobbs inherited this house from previous owner Jack Duckworth and lives here with his girlfriend Fiz Stape, with Hope and Ruby, their children from previous relationships. The living room at No. 9 is the girls' toy room, though Luke Britton and Freddie Smith have lodged here over the past year.

No. 10a Coronation Street
Rita Tanner's home above her pride and joy The Kabin. Lairy kebab shop worker Gemma Winter lives here too, and it wouldn't surprise me if Jenny Bradley came running back to No. 10a soon following troubles between her relationship with Johnny Connor.

No. 11 Coronation Street
The abode of Eileen Phelan and her evil husband Pat. Eileen's son Todd Grimshaw also lives here, alongside his boyfriend Vicar Billy Mayhew, who splits his time between No. 11 with Todd and the vicarage. Sean Tully used to live here for many years, sleeping in the front bedroom before moving in with Norris recently at No. 3. Shona Ramsey was staying at No. 11 until her recent departure - but she will be back soon. Will she have a place to stay though, as Billy's goddaughter Summer arrives in Weatherfield very soon.

No. 12 Coronation Street
The last resident of No. 12 was Julie Carp, but she left in 2012. To the best of our knowledge, nobody has lived here since! 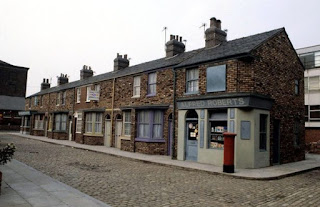 No. 13 Coronation Street
I'm glad Kevin Webster is back at No. 13, afterall he did inherit it from Hilda back in 1987 and I always thought it was a shame that he swapped it with the Peacocks back in 2008. He lives here with girlfriend Anna Windass, his son Jack and Anna's adopted daughter Faye.

No. 15a Coronation Street
Troubled Daniel Osbourne is all alone in the flat above the corner shop now that his nephew Adam, ex-girlfriend Sinead and mum Denise have moved out.

...and I'm going to leave this blog post there, for now. I'll cover Victoria Street, Court and Rosamund Street in another post later in the week as I'm fearing now that this blog could go on, and on, and on. Just imagine what it'll be like when the extensions are added to the set!

Alex moved into an apartment in some sort of community housing. He is not too far away, and so can easily come back.

He was at Anna's surprise party.