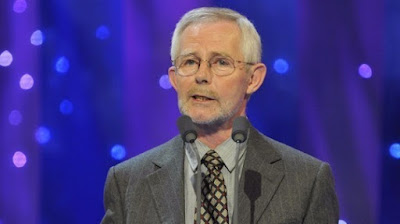 ITV Coronation Street has confirmed today that scriptwriter Peter Whalley has passed away.

Peter Whalley was at the heart of the Coronation Street writing team for 35 years and wrote 600 episodes, more than any other writer in the programme's history.

Peter was given a Lifetime Achievement award at the 2009 British Soap Awards before retiring in 2013.

Coronation Street Executive Producer Kieran Roberts today paid tribute to Peter. He said: "Peter was not just a prolific and brilliant writer, he was also an invaluable source of great ideas and equally great wisdom in our story conferences. Everyone who knew Peter will also remember the lovely man behind the great writing talent."

Peter Whalley was born in Colne, Lancashire. He started writing when teaching at a school in Pontefract, but gave this up after joining Coronation Street as a scriptwriter in 1979. He became the senior writer on the Coronation Street team.

Peter also wrote two episodes of the Corrie spin-off Coronation Street - After Hours and he wrote the live 40th anniversary episode of Corrie in 2000.

When Peter Whalley was given a Special Achievement Award at the British Soap Awards in 2009 he said:  Peter, who has worked on the nation's favourite show for three decades, said in an interview: "It was a complete surprise and a great honour. After 30 years it's good to receive something for the mantelpiece. It's the best job there is. I can't think of a better one."


Devastated by the death of a great friend Peter Whalley who wrote more Coronation Street eps than anyone else. He was a story genius
— Daran Little (@DaranLittle) 28 July 2017

Our thoughts to go Peter Whalley's family at this sad time.

For a full list of all of the episodes written by Peter Whalley, see Corriepedia.