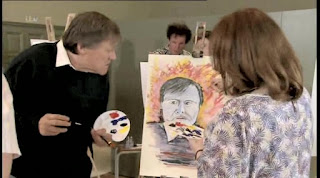 Art is Life award: Cathy's portrait of Roy was full of colour, life and nuance, very much like her. Roy sees things in black and white so his portrait of Cathy was the same.


Tangent award: Roy broke into Cathy's house to help her and started on an explanation of why he keeps a fire extinguisher in the car! European regulations and all that. I *heart* Roy Cropper!

Trivial Pursuit award: Laughed at Lloyd and Kevin and Tim reading nature facts from the book left in the cab. I love little things like that!

Musical Doors award: I thought there was now a separate entrance door to Roy's flat. Why did Cathy come to the cafe after hours looking for him?

Grand-Mothra of the Bride: Forget Bridezilla, Yasmeen has taken the art of wedding planning to new heights!

Careless but Contrived award: Alya left the pregnancy test box in a bin so the others naturally found it.

Dropped Storyline award: The bailiffs were at Cathy's door, promising to come back. They never did. What happened? She wouldn't let Roy pay them so she must still owe.

Sopranos award: Sarah thought Gemma was over dramatizing what happened to her, likening it to a mob movie. Then Max came out of the bedroom with a gun. 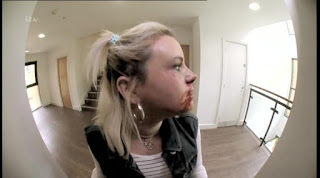 Lines of the week:
Tim about Sally "She drops the K-bomb (Kevin) like there's no tomorrow"
Sally "You're perfectly happy 'pootling'" (so leave him alone!)
Yasmeen "This marriage is going to be a complicated affair and will need military Liz to Tony "You know where the viaduct is. I think there's a tram due in 10 minutes" (Ha! Clever!)
Sally to Alya "I diagnose a severe case of being out of your depth" (she is, but not to do with business)
Roy "The one constant in life is change"
Beth about Sally and Tim "I've seen the pair of them sneaking off at every wedding we've ever been to!"
Gail about Bethany "She's a teenager. She sees it (winding up her mother) as a rite. Or, in David's case, a pass time"
Cathy "I like a bit of a boogie in the morning, get the blood flowing"
Sally "This may be a back street greasy spoon, but to me, it's an oasis in a cultural desert"
Kylie "So what, you're going to brainwash him (Michael) into going back to you?" Gail "If that's what it takes. Yeah!"
Kirk to Beth who's just been called an attack dog "It's a compliment! Dogs are loyal, good looking and the top of their head smells great!"