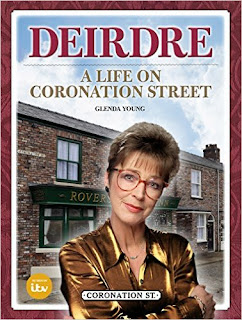 An official Coronation Street tie-in celebration book of Deirdre Barlow's time on the show has been announced.

It's called Deirdre: A Life on Coronation Street

The book is an affectionate tribute to one of Corrie fans' all-time favourite characters. Deirdre was on our screens for over 40 years and in that time she became a British institution.

The book is packed full of storylines, reminiscences and fascinating trivia. It explores Deidre’s pinnacle moments on The Street. From her first appearance in Weatherfield as a slip of a lass with a shoulder-length bob and with just three lines to say to becoming the most loved and talked about character in the history of the show. It has a wealth of never-before-seen photographs too.

The book has been written by Glenda Young. That's me!