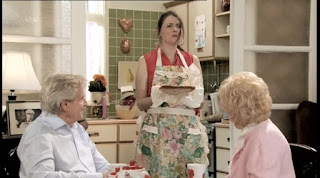 Overboard award: Tracy never does anything by halves and well she knows it.

Laugh of the week: Kevin's mate assuming Kevin is gay, remembering that daft moustache back in the day. "Dead giveaway" Did you see Kevin's face!?!!

Don't Fancy your chances award: Even two against one, the thugs didn't reckon they could take Robert.

Cash Money award: Cathy has had the bailffs at the door for non-payment of her bills, where did she get the money for the train replica for Roy because I don't believe for a minute it was in one of her piles of junk.

Pants on Fire award: Robert letting Ken and Tracy think he's not married. He clearly has someone on the other end of that mobile.

Musical ambience: Cupid playing in the pub when Michael finally joined Eileen after Gail's attempts to lure him back.

Lines of the week:
Carla "I never said I liked losing. Who does?"
Tracy to Carla "I'm on your side. I know it wasn't your fault" (of course you do)
Izzy "When Carla slaps a backside, it stays slapped"
Carla to Roy "Was that a joke, Roy Cropper?" Roy "Very nearly"
Carla to Roy "Is there a statue of you in a church somewhere because if there isn't there should be"
Ken "You don't need to go overboard" Tracy "Me? Overboard?"
Steve about Eccles (lamp posts) "It's like Twitter for dogs"
Liz "Get out of my pub and get out of my life. I never want to see you again!" (now THAT'S a landlady the likes of which we haven't seen since Bet Lynch!)
Robert "Tracy listen to anyone? That'd be a first"
Dan "You ruined my life. So now, I'm going to ruin yours"
Jason about Liz "She's got a new bloke now. Someone decent for a change" (um...)
Steve about Gail luring Michael back "Something seductive, like the Dance of the Seven Gails"
Tracy "D'you know how hard it is? Trying to be nice?"