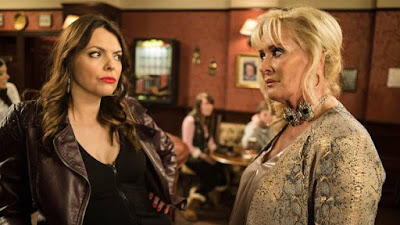 Here's some cast contract news, which comes from The Sun.  As there's no official Coronation Street source for this tabloid snippet, as always take with a pinch of extra salt with your Curry Sauce.

The Sun reports this week that Kate Ford and Bev Callard (Tracy and Liz) have been given 'generous new contracts' to stay on the Street.  After Corrie favourites recently exiting (and a few more to come, but no spoilers!), The Sun says Corrie bosses are keen not to lose any more characters.

Mr Curry Sauce tells the paper: “With so many cast members quitting recently, the bosses have been panicking that others may follow in their footsteps. They can’t afford to lose any more favourites, so they have wasted no time handing out these new contracts, some of which are very generous."

Newbies Tisha Merry (Steph Britton), Oliver Farnworth (Andy Carver) and Daniel Brocklebank (Billy Mayhew) will be on the soap for another year.  Daniel's contract has already been confirmed - read here.