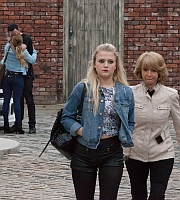 Well Bethany's made her move and Callum backed off just in time, so Sarah didn't see Bethany try to kiss him. Callum doesn't want Bethany in that way anyway, he's just winding her up and stringing her along, let's face it but Bethany doesn't know that. Sarah practially dragged her out of the pub by the hair and Gail dragged her in to work by the Bistro. Steph offered to talk to Bethany instead and she's right, kids don't listen to their family. But then neither do adults a lot of the time! It didn't work. Bethany knows a lecture when she hears one and Steph is too young to be giving life lessons.

Even Sarah can see Bethany has a crush on Callum. A passionate snog on the corner, knowing Bethany can see might be Sarah's and Callum's way of trying to put her off but i doubt that will work. When confronted with her crush and laughed at by Gail for it, Bethany decided to push a few buttons herself and then ran out to meet Callum, and he met her because he wanted to make sure she kept quiet about the raid. Seems to be they're both playing a dangerous game, trusting the other.

I'm surprised Sarah lets Bethany push her buttons where Callum is concerned. Unless, of course, down deep, she does know that Callum is a wrong'un. Callum is in a dirty mood, too, scowling and shouting the odds in the gym. What's eating him? Sarah confronting him and Bethany had Bethany backing down and clearly, that plan of hers didn't work. Callum still has Bethany under his thumb, though.

Gail's had an idea, con Bethany into making spaghetti, try to keep her out of trouble, make peace with Sarah, neither of which worked because she and Sarah can't seem to help bickering though I think this time Bethany was the one that just couldn't leave it alone and instigated it. Sarah and Gail had a nice conversation but even they are still a bit at odds at times. What's really weird is Sarah trying and trying to call Bethany and even standing in front of the window, where, shortly before, we saw Bethany standing across the road while Kylie was loading kids from the taxi. She could have just gone outside to talk to her. 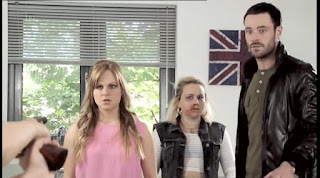 Kylie's back from holiday with the kids but David stayed on to visit with his dad a bit to get away from Max going on about Callum constantly. Sarah still can't really accept that Callum is a wrong'un but I think she knows down deep. What will it take to open her eyes? Kylie really is scared she's going to lose Max but today, the scales finally fall from Sarah's eyes and she realizes that everyone was right about Callum. She is at Callum's flat watching DVDs with Max while Callum is out doing business and Gemma comes in, bleeding and black eyed and ranting about Callum needing to sort someone out. She lets slip that she covered for Bethany but won't say what that's about and when Callum comes back, Max comes out of his bedroom with something he found up in the back of the wardrobe, a big, black handgun!!! Oh crap! 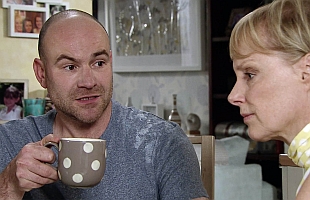 Sally's on the warpath now that she knows Tim didn't go for the new job. But Tim kind of reckons Kevin should have kept his beak out. Sounds very much like Tim is starting to feel compared to Kevin and coming up short. Tim hid out in the pub so Sally came to drag him out. He doesn't have much ambition, so what? Well, Sally has always pushed her fellas to greater things and back in the day, Kevin resisted, too. Sally's going to push him right out the door if she keeps on like this. I'm glad he reminded her of the fact that Kevin with off with another woman (twice, you may recall) and he would never do that to her. Will it give her something to think about? Sally is still pushing Tim. All he has to do is suggest a contract he might try to get and she's all over it. She better be careful. At least Tim tried to make it up by wearing the ironed shirt for her. They kind of made up, though. They are so good together!

Eileen and Michael are settling in quite domestically. Eileen seemed to feel just a slight sliver of guilt over taking Gail's fella. Just slight. It didn't last. Eileen takes great pleasure in baiting Gail which makes Michael uncomfortable. Then later, after a dressing down from a very bitchy and demanding woman, who didn't pay Lloyd for an airport run, Eileen finds a bracelet and decides to keep it. More disillusionment for Michael. Gail's still heartbroken over Michael and Kylie does seem to be sympathetic. to a point. But Gail certainly can witter on and bore for England, can't she?

Anna still thinks Faye is going to regret giving up the baby. Tony's still trying to get back in Liz's good graces. He'd be willing to sell Steve back his half of the pub but Steve can't afford it just now. She's not got an answer for him and he's still lurking around. Lovely that Ken went to the pub on the anniversary of his and Deirdre's first wedding. Very nice gesture for him to give Liz one of Deirdre's bracelets. Kevin is really getting grumpy lately and Tyrone doesn't like it much. 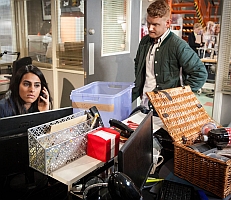 Gary is starting to think Alya's going off him but she managed to soothe him by coming to apologize. Alya might have made it up with Gary but she's still distracted and feeling a bit ill. And there you have it, the oldest soap cliche ni the book. One shag where she shouldn't have and she thinks she's pregnant. Is she? Sinead ended up saving her backside, pretending the pregnancy kit was hers (and negative) when the others found it in the bin. Careless, that. And contrived. She said it was negative. She confessed to Sinead that she slept with Jason.

Meanwhile, her grandmother has jumped into wedding planning with a vengeance, probably overwhelming the bridal couple. They're handling the engagement sensibly at least. The planning session didn't really go smoothly because Alya was in a state. Why didn't Gary mention inviting his father to the wedding? Seems a bit mean. 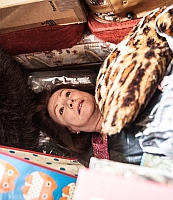 Roy was horrified at the suggestion that he fancies Cathy but Tyrone kept reminding him that Cathy's a good friend so he did call her. Next thing you know, Cathy's invited for Curry Night at Roy's with Tyrone and Fiz. The curry night didn't go off as expected. Roy is still defensive that anyone thinks he and Cathy are romantically inclined. Then Cathy didn't show up because the clutter got on top of her. Literally. It had to happen. At least now, Roy can drive to check on her himself. He rescued her and they had a lovely conversation there and later at his flat. Roy's right, of course, she can't live like that.

Roy has a plan. He's taking Cathy out for the day and Fiz, Tyrone and Chesney are clearing out the living room for her. She even agreed. That's a step in the right direction. Cathy chose to go to a gallery. She loves art and museums, gets really passionate about art. Roy may not be passionate about art but he does enjoy it, another thing in common with Roy. They even took a walk in art class and painted each other's portraits, Cathy's of Roy full of colour and his of her a sketched outline in black on white. Very much like their own personalities I'd say.

They didn't throw anything out so where did they put it? They boxed it up, bagged it up and put it in a shed. Tyrone thought it was better to do a proper clear, which was more than Cathy or Roy expected and she had a difficult time with it. Panic attack time. She really couldn't cope and didn't think she was going to be able to maintain the tidiness. Therefore, she's accepted Roy's invitation to live in his flat. Where Carla has been living. But she did say her own flat would be repaired by the time she came back from her holiday. She sounds desperate and I think she could benefit from counselling. Cathy is getting used to Roy's little foibles and the way he does things in the flat an cafe but it seems like it's a bumpy ride so far.

Meanwhile, Carla returns from holiday and is a bit awkward with Roy, regretting the horrible things she said before she left. Her flat is now liveable so she doesn't even have to retrieve her things from Roy's. Nice, that. We also discover that her bank balance is 31,000 in debt and when Michelle comes and is given a gift, we find out that Carla went to Las Vegas, not Madrid and must have gambled that bank balance into red. Oh dear, that's not good.

Robert shows up again, though he says he's not hoping to talk to Tracy he's still sitting in the Bistro hanging around which is where his wife finds him. She makes him sign their restaurant over to her and we find out that she's the one that financed it anyway, he was just the talent! Beth has already shouted at him once already and runs into them in the Bistro where Joni insults her. Beth does always seem to back down, though, all mouth and no bite.