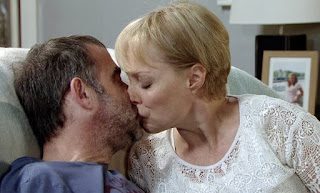 Last night on Coronation Street we saw Kev and Sally have a snog on the sofa.

Michael Le Vell, who plays Kevin Webster tells Radio Times about the kiss and how, in soap, it can't remain a secret for long.

Michael says this about the kiss: "Kevin does respond at first. But after about five minutes, he realises that what he's doing is wrong. He's feeling total shock and disbelief. He knows deep down that Sally didn't mean it and that it was just a spur-of-the-moment thing. But they're full of remorse and they do feel bad afterwards for Tim. Even though it's not really Kevin's fault - Sally does pounce on him!"

"He'll always have feelings for her. They were together for a long time. So he'll always love her - they just hurt each other too many times. Too much water has passed under the bridge. Never say never, but I think Sally and Tim are a great couple and Kevin enjoys seeing them together as well. And he's got a new best mate in Tim."

"I don’t think it will stay a secret, no - I’m not sure who will tell who, but I do know Sophie is quite suspicious. Whether anyone else close to Sally or Kevin will be brought into the loop, I don’t know. But if Tim finds out he’s not going to be happy.

"It could end up putting the wedding in jeopardy. Tim would be left always doubting Sally’s true motives for marrying him and wondering whether she loves him or still has feelings for Kevin. It would stir a lot of emotions up and bring out a lot of insecurities in Tim."

And if it came down to Sally choosing between the two men in her life, then who does Le Vell think she should be with? "That's a big question…Tim! I think Sally and Tim should be together."